Sitting at the crossroads of East and West, Kazakhstan's potential to become a central aviation hub is set to be boosted by infrastructure developments at the country's second-busiest airport.

Five years ago, the International Air Transport Association (IATA) predicted that Kazakhstan would experience the fastest growth rate in international passenger traffic from 2012-16, with domestic flights also forecast to add 3.9 million passengers to the 2.2 million in 2011.

Although the country's oil and gas-reliant economy stuttered for a period since those predictions were made, capacity has nevertheless surged, albeit at a slower rate since 2014. Scheduled international departure seats grew by 29.2 percent from 2012-16 to 2,967,634, while domestic growth increased by 45.1 percent to 5,178,870.

Almaty International Airport (ALA), set in the foothills of the Trans-Ili Alatau mountain range and about 15 km of the country's commercial hub, remains Kazakhstan's busiest airport. However, Astana International Airport (TSE), 17 km south of the capital Astana, has been making strides to ensure growth in connectivity is not constrained by aging infrastructure.

Earlier this month, Astana took the wraps off its new terminal just in time for the three-month Expo 2017 festival in the city that is expected to welcome almost 3 million visitors and delegates from more than 100 countries. Russian President Vladimir Putin was among the first attendees when the event got underway on 10 June.

The airport's new 47,000 sq m terminal building, which has been under development for almost three years, includes a passenger hall and a VIP area, as well as six new aircraft stands and four bus transfer exits.

Paolo Rïçïottï, chairman of the board of Astana International Airport, believes the scheme will allow Kazakhstan's capital to "become the main link between the cities of the world". He added it could be "the regional hub of the Central Asian region". It is hoped that the new building will increase the airport's throughput capacity from the current 3.6 million passengers to 8.2 million per year.

Indeed traffic at Astana has been steadily increasing in recent years. Since 2012, total international capacity has grown by almost three-quarters to 889,884 in 2016, while domestic capacity has increased by 59.6 percent to 1,500,377.

The expansion at Astana comes at a time when Kazakhstan's Ministry for Investment and Development has adopted a permanent free-market "open skies" policy to coincide with Expo 2017, signalling a more liberal approach to air transport.

International carriers are responding. Air China launched a three times weekly service (Tuesday, Thursday and Sunday) on 1 June from Beijing to Astana, while WizzAir started a twice-weekly service (Thursdays and Sundays) from Budapest. Both services are operated by Airbus A320.

József Váradi, chief executive of Wizz Air, says that connecting the capitals of Hungary and Kazakhstan could "significantly contribute" to the development of economic and business relations between the two countries. "We also believe that our low fares will attract a large number of visitors to both cities stimulating tourism and hospitality industries," he added. 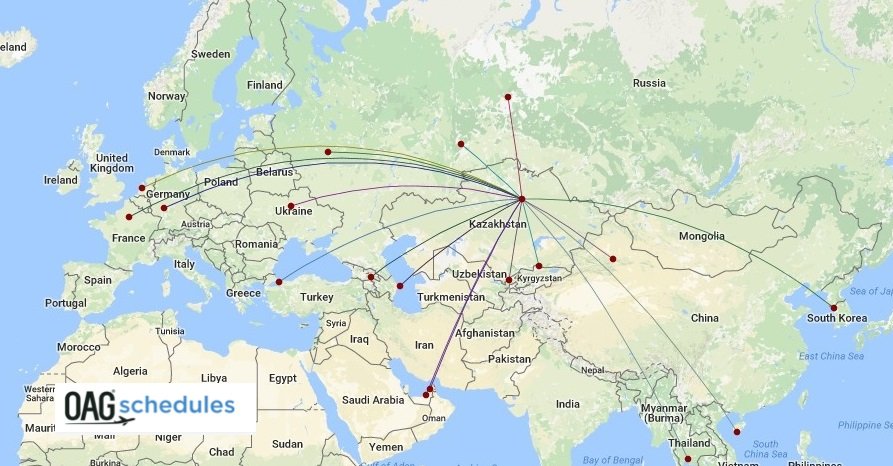