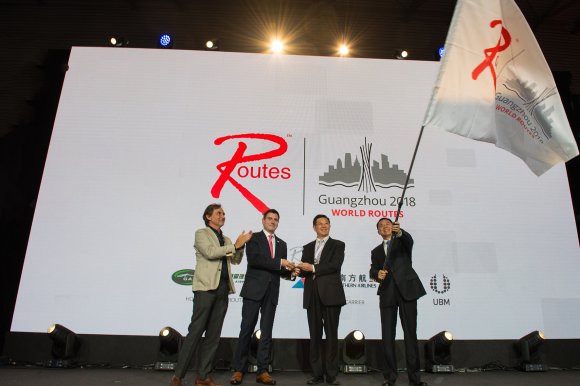 World Routes brings together airlines, airports and destinations to plan and negotiate future air services. Guangzhou, an economic hub on the Pearl River in Guangdong Province, South China, will provide the perfect platform for the event in 2018.

Guangzhou has been an important trade centre for 2,000 years due to its strategic position near the South China Sea. Its economic strength has helped Guangdong to maintain its status as the richest province in China for the last three decades.

The colourful Canton Tower and Cantonese cuisine has made Guangzhou a popular choice with international tourists. Other attractions include the asymmetrical Guangzhou Opera House, the Five Rams Statue in Yuexiu Park, a variety of Buddhist temples and Baiyun ‘White Clouds’ Mountain.

The growth is set to continue into the next decade as Baiyun’s expansion projects are completed. The airport will be transformed into a five-runway, three-terminal operation that can handle 62,000 flights, 100 million passengers and three million tons of cargo a year by 2025.

Steven Small, brand director of Routes said: “Baiyun International Airport’s development plans reflect Guangzhou’s economic strength. China is due to become the world’s largest aviation market in the next seven years and Baiyun will take a leading role in this growth.”

Mr Kejian Zhang, Chairman of the Board of Guangdong Airport Authority said: “It’s a great honour to win the right to host World Routes 2018. I believe it will be an excellent opportunity to showcase Guangzhou City and Guangdong Province to the world.

“We’re looking forward to meeting all of the friends of this great event. We’ll be meeting them with our best service and full enthusiasm.”

More information about World Routes can be found at routesonline.com