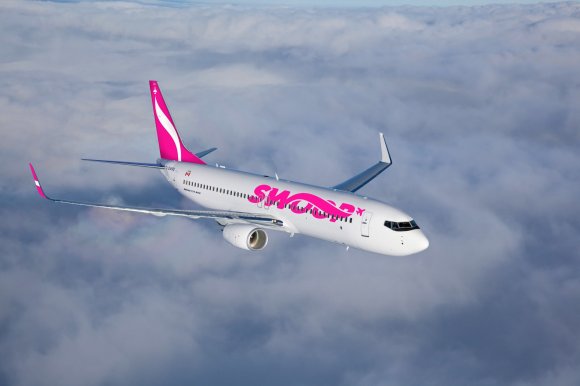 Canadian carrier WestJet's ultra-low-cost airline (ULCC) will be based in Calgary and named Swoop, the airline has revealed.

"The name Swoop denotes exactly what we plan to do," said Bob Cummings, WestJet executive vice-president, strategy and the executive member responsible for the launch of Swoop.

"It's a powerful verb that demonstrates we plan to swoop in to the Canadian market with a new business model that will provide lower fares and greater opportunity for more Canadians to travel."

The new airline will initially operate a fleet of ten high-density Boeing 737-800s transitioned from its parent's fleet.

WestJet said Swoop would provide Canadians with a "no-frills, lower-fare travel option". The exact location of Swoop's Calgary based will be announced at a later date.

Cummings added: "As we looked around for the home for Swoop's operations, Calgary quickly rose to the top of the list.

"The city offers Swoop the opportunity to save costs through shared services with WestJet's corporate head office, the availability of existing infrastructure, and talented, experienced WestJetters to draw from. We are confident that these qualities will support our ultra-low-cost operations and our guests well into the future."

WestJet was founded in 1996 as low-cost alternative to Air Canada and Canadian Airlines and has expanded steadily in recent years. In 2017 its domestic capacity is expected to grow to 20.8 million available seats, according to current published schedules, up from 19.5 million in 2016.

Cummings said: "We are confident our unique combination of expertise in the Canadian aviation industry and deep knowledge of the ULCC market will ensure the success of Swoop and help more Canadians take to the skies."

Earlier this month, rival aspiring Canadian ULCC Canada Jetlines revealed it will fly out of Hamilton and Waterloo when it launches next summer and offer customers a base fare below $100.