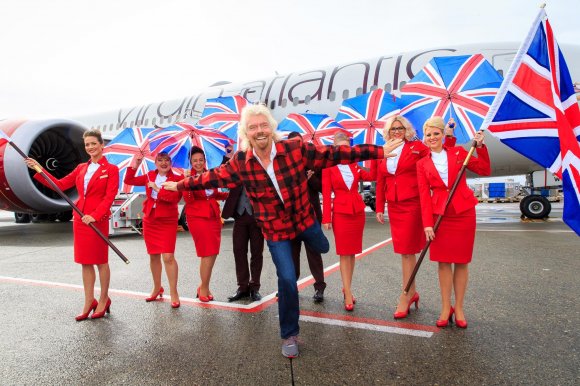 Five years ago this month, International Airlines Group chief executive Willie Walsh said he was happy to bet Sir Richard Branson a “knee in the groin” that Virgin Atlantic wouldn’t exist in its current form in five years’ time.

The public spat between the aviation heavyweights came after Delta Air Lines bought a 49 percent share of Virgin Atlantic, with the outspoken boss of British Airways’ parent company questioning whether the US carrier would want to continue operating the Virgin brand.

In response, Branson challenged Walsh to a million-pound wager – if Virgin Atlantic was still flying in five years then BA had to pay £1m to Virgin staff; and if the airline had been consigned to history then he would give £1m to BA employees. Although Walsh declined, saying it was unfair as Branson was a “billionaire banker”, he instead suggested the potentially eye-watering alternative.

Five years on and Virgin Atlantic is yet to disappear from the skies, despite a rocky period which included racking up pre-tax losses of £51m in 2013 and £102m in 2012. In 2016 the carrier posted a 2 percent rise in underlying pre-tax profit to £23m on revenues of £2.69bn, helped by a 6 percent capacity rise on transatlantic routes.

Its turnaround in recent years has been spearheaded by Craig Kreeger, the chief executive appointed in early 2013 to cut costs and restructure its operations. A two-year recovery plan was implemented, which he describes as the “airline 101 avoiding bankruptcy playbook”.

“The company had had quite a rough couple of years before I joined in 2013,” he says. “But we decided not to touch costs that affect customers – we went after the harder to reach costs.

“We implemented new technology to make us more efficient, streamlined the management structure and outsourced some maintenance operations. Essentially we looked at what was not core to Virgin Atlantic, but would still not harm the customer.”

Kreeger adds the airline also cut non-profitable routes, with services to Cape Town, Mumbai, Tokyo and Vancouver among those axed. According to figures from OAG, Virgin Atlantic operated 45 routes in 2013, compared with 38 in 2017.

“We looked critically at where we fly,” he says. “Airlines have strategic routes – what that means is they don’t make any money. An airline our size can probably have one or two strategic routes, but we had way more than that.

“We therefore analysed whether it could be profitable in the future and, if the answer was no, we looked for a better place to fly and therefore made major changes to the route network.”

However, while the measures put in place following Kreeger’s appointment have revived the airline’s fortunes, intense long-haul competition from low-cost rivals such as Norwegian and WestJet, coupled with high fuel costs and a weak pound, have continued to hurt its bottom line.

“We’ve experienced a period recently where the weaker pound has meant that while it’s more expensive for Brits to go abroad, flights to the UK from the US have effectively been on sale for the last 12 months as other currencies are worth so much more,” says Kreeger.

To help combat the mounting pressures, Virgin Group in July agreed to sell a 31 percent stake in the airline to Air France-KLM for about £220m, reducing founder Branson’s shareholding to 20 percent.

In addition, Virgin Atlantic signed a deal to create a global joint venture with SkyTeam members AirFrance-KLM and Delta, thereby creating a sizable force on the transatlantic market. The new partnership will replace two existing joint ventures – one between Virgin and Delta and another between Air France-KLM, Delta and Alitalia.

Speaking to Routesonline at Alliance Manchester Business School, Kreeger said the success of the Delta joint venture, which has provided feed traffic in the US, could now be replicated with passengers from Europe via Air France-KLM’s short-haul network.

“Having seen how valuable it has been with Delta customers coming to the UK, the idea that we could have that with Air France and KLM customers was very appealing,” he explains.

Benefits will also include co-location of facilities at key airport hubs to improve connectivity times for customers, as well as access to each carriers’ airport lounges for premium customers.

Further explaining the rationale Branson’s share sale, Kreeger says: “To sow it all together we felt it was very important – since 70 percent of Virgin Atlantic’s business will be in this joint venture – for our partners to have an economic interest in our success.

“We wanted them to be totally motivated and for them to be doing what’s right for the JV and be focussed on Virgin Atlantic. To do that the sale of some equity to Air France-KLM to glue the JV together was critical.”

Kreeger adds that he does not expect the partnership to “change anything” about Virgin Atlantic, with the carrier retaining its independence as a UK airline with a UK operating certificate.

“Although Sir Richard will only retain 20 percent, the group will remain chairman and governance over the brand and the size of the business,” he says. “This will ensure it remains vibrant, large and Virgin Atlantic through and through for the foreseeable future.”

In a letter to staff following the deal, Branson reasoned that the move puts the carrier at “the heart of an important alliance” and would ensure it continues to “prosper and grow”.

And in a cheeky swipe at Willie Walsh, he added: “Willie Walsh predicted that the Virgin Atlantic brand would disappear within five years as a result [of the Delta deal].

“Whether childishly or bravely, he also said he’d accept a knee in the groin from me if it didn’t. Well, Willie, that five-year point is up this December. And Virgin Atlantic is still flying strong!”

It seems Branson is ready to cash in on the bet.