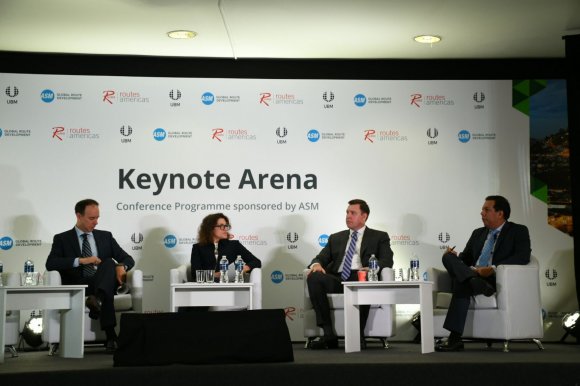 Speaking in a Routes Americas 2018 panel session concerning the state of the Americas region, IATA regional vice president for the Americas Peter Cerda said elections were due this year in Mexico, Colombia, Costa Rica and Brazil.

He added: "Depending on how those elections turn out, it could have a dramatic effect (on aviation)."

Cerda cited the example of Argentina where a pro-business government was recently elected and is now driving growth in the market.

He added: "But if it goes to the left, we'll see reform that will have a significant impact."

Cerda also argued that South America is not the only region where governmental policy is having an impact on the fortunes of the local airlines.

"Government intervention will be critical for the Americas outlook," he added. "The famous wall in Mexico had a real impact on profitability for carriers in the country."

"The issue of government intervention is going to be a critical component for the industry and what's going in to play in the next four to five years. We are optimistic but it will depend on the politics."

Despite the concerns of government meddling, the panel believed that growth in South America will be around 4 percent to 5 percent over the next few years.

ACI-LAC director general Javier Martinez Botacio said: "Overall I would say the aviation situation is very positive but there is still room for growth."

ACI-North America vice president, air policy Matthew Cornelius added: "It is very positive, certainly we've enjoyed growth over the last several years and I think that's going to continue. The growth rates will be less than other parts of the world but still pretty good.

"Legacy carriers are returning to some of the smaller markets and that's not been seen since the downturn of ten years ago."

Cornelius said a spirit of openness in the US can also benefit everyone involved, adding: "The US government is about a year into a new bilateral agreement with Mexico and there's good traffic growth.

"In the US and Canada we're very positive about continued growth, it is not going to be double digit but it is going to be solid."

He predicted growth rates of between 3% and 5% in the two countries.

Cerda added that US carriers were looking in total at turnover of around $16 billion, generating $800 million in profit.

World Travel and Tourism Council regional director of southern Europe and LATAM Maribel Rodriguez added with as many as one in 10 jobs globally dependent on travel and tourism such growth is to be welcomed.

She said by 2027 as many as 100 million people globally will be employed by airports, airlines and the aviation industry.