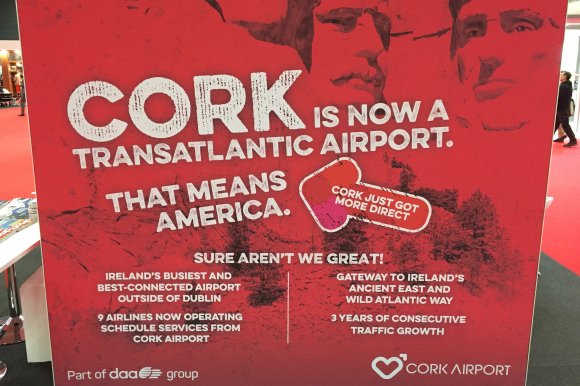 As part of its involvement in Routes Europe 2018, Routesonline spoke to Cork Airport to hear its route development plans.

As a result of our new and expanding routes, Cork Airport is leading the way in Irish passenger growth. Since 2017, we’ve increased the number of new airlines by 80 percent, which includes the launch of Cork’s first direct transatlantic service in July last year. The inaugural Norwegian service to Boston Providence is on course to fly a record 38,000 passengers in its first year of operation.

Air France is also to begin services out of Cork Airport from May, with a new Cork to Paris-Charles de Gaulle route. Initially planned to only operate during the summer season, the daily service has now been extended to a year-round route due to positive forward bookings.

Aer Lingus has also announced a year-round service from Cork Airport to Lisbon Portela Airport, commencing 26 October; while Ryanair is extending its twice weekly summer service from Cork to Faro into the winter season.

Further expansion in the US is being targeted by Cork Airport. With Cork’s first direct transatlantic route launched last July with Norwegian’s service to Boston Providence, the airport is firmly looking at expanding its US offering, through a New York connection.

Cork Airport has seen a strong demand for flights from Italy, in particular Rome, over the past few years. There’s been double-digit growth in Italian visitors as well as strong outbound demand to visit the capital city.

What are the opportunities on offer in the region?

Cork Airport is perfectly positioned at the centre of two of Ireland’s largest tourist attractions,  – the stunning natural beauty of the Wild Atlantic Way and the rich heritage of Ireland’s Ancient East.

The south of Ireland’s unique trails appeal to a huge number of European and American visitors. Last year, Ireland saw exceptional numbers from North America, with more than 2.1 million visitors, up over +16 percent on 2016.

Cork currently accounts for 18 percent of all overseas visitors who come to Ireland, including American visitors. This is a major opportunity. Cork Airport is continually working towards providing greater access options to Cork through direct services for this key target demographic.

What is your main message at Routes Europe?

Cork Airport is growing. It is the second busiest and best-connected international airport in Ireland. In 2017, it became Ireland’s newest transatlantic airport, with Norwegian’s direct service to Boston Providence. It has grown passengers by 310,000 in three years having achieved 15 percent compound growth by fostering long-term relationships with its airline partners. The airport has also been acknowledged by ACI Europe and the Irish Aviation Authority for its excellence in customer service.