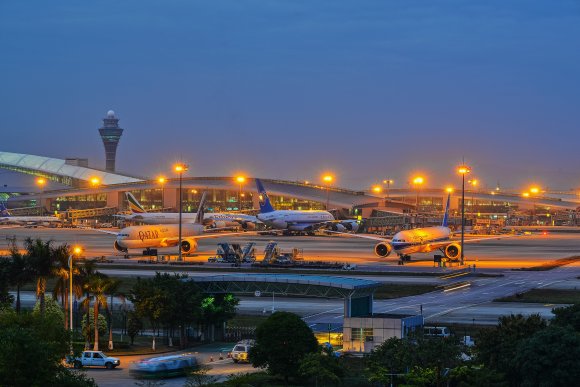 The 17 billion yuan ($2.7bn) building opened on 26 April 2018, with Xiamen Airlines, Saudia, Garuda Indonesia and Kenya Airways the first four carriers to operate out of it. China Southern Airlines is to anchor the terminal and will begin its operations from there in phases.

It is expected the 880,700 sq m terminal will handle about 45 million passengers a year in 2020. Following additional phases of development, the airport will be transformed into a five-runway, three-terminal operation that can handle 62,000 flights, 100 million passengers and three million tons of cargo a year by 2025.

Terminal 2, which has 20 self-service outbound channels and another 30 inbound channels, will introduce advanced artificial intelligent measures, including e-channels and a face recognition system, to raise efficiency and simplify exit and entry procedure.

Guangzhou Baiyun's existing terminal, which has been in operation since 2004, has capacity for 35 million passengers annually but handled about 64.7 million passengers during 2017, according to preliminary figures from Sabre. This placed it as the third busiest in China - behind Beijing Capital (98.4 million) and Shanghai Pudong (71.8 million) - and 14th in the world overall.

However, the new terminal is likely to help Guangzhou overtake Hong Kong as the main air hub in the Pearl River Delta. In 2017, Hong Kong handled 72 million passengers, according to the same Sabre data.

World Routes 2018 will be hosted by Guangdong Airport Authority, the owner of Baiyun International Airport. The event will bring together airlines, airports and destinations to plan and negotiate future air services.

Guangzhou has been an important trade centre for 2,000 years due to its strategic position near the South China Sea. Its economic strength has helped the Guangdong province to maintain its status as the richest province in China for the last three decades.