Qantas has ordered six additional Boeing 787-9s to fly on its international network, bringing its fleet of Dreamliners to 14 by the end of 2020.

The arrival of the new aircraft will spell the end of its remaining 747s, an aircraft type that has been in its fleet in various forms since 1971. The ‘Queen of the Skies’ will now be retired by the end of 2020.

Qantas Group chief executive Alan Joyce said the order would enable the airline to look at more long-haul destinations in the Americas, Asia and Europe.

“This really is the end of one era and the start of another,” he added. “The jumbo has been the backbone of Qantas International for more than 40 years and we’ve flown almost every type that Boeing built. It’s fitting that its retirement is going to coincide with our centenary in 2020.”

Interiors of the additional 787s will feature the same configuration as the existing aircraft. The Qantas Dreamliner carries fewer passengers than the larger 747 (236 seats vs 364) and has a greater focus on Business and Premium Economy seating.

Joyce said: “Over the years, each new version of the 747 allowed Qantas to fly further and improve what we offered passengers. The Dreamliners are now doing the same thing.

“The 787 has better economics and a longer range, and it has already opened up new routes like Perth to London. With a larger fleet of Dreamliners, we’ll be looking at destinations in the Americas, Asia, South Africa and Europe.

In March, Qantas launched a daily Dreamliner service linking London and Perth, becoming the first non-stop regular link between the UK and Australia. At 14,498km, it is the second longest flight in the world by distance.

There are currently ten 747-400s left in the carrier’s fleet and these will be steadily retired between July this year and the end of 2020. Qantas received the last of its 747s new from Boeing in 2003.

Delta Air Lines, United and EVA Air were among the carriers to retire the 747 from their fleets in 2017.

Earlier this month, it was confirmed that Qantas’ last remaining Boeing 747 services operating into Los Angeles will be replaced by a combination of Airbus A380 and 787-9 from 3 December 2018.

From September, its Brisbane-Los Angeles-New York City (JFK) service will also be operated by 787-9, rather than 747, and the 787-9 will operate Melbourne-San Francisco four times a week. 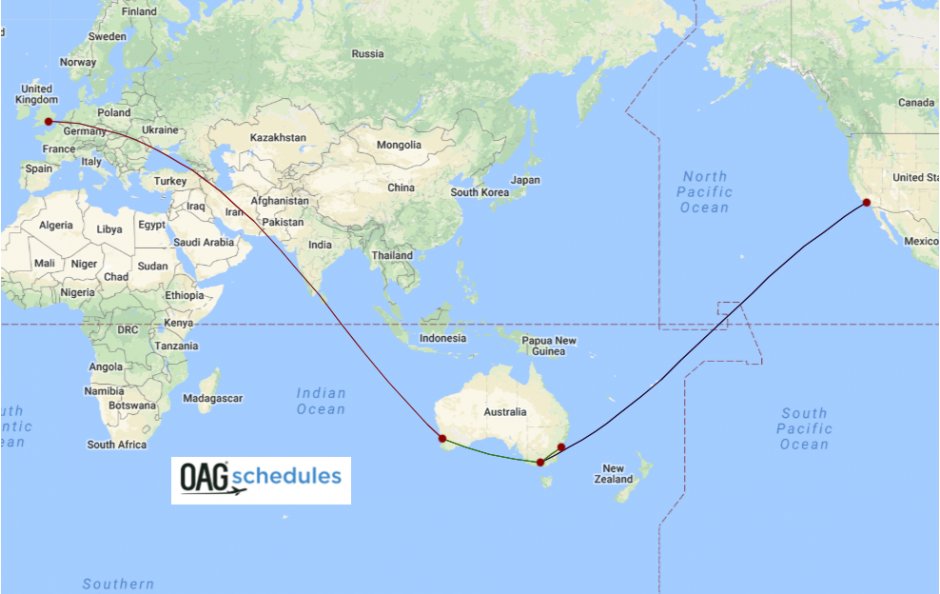 Qantas' 787-9 aircraft order was announced as the airline reported its results for the third quarter of its financial year. Total revenue for the three month period to 31 March 2018 was up 7.5 per cent to A$4.25bn, compared with the same period last year.

Qantas said the timing of Easter, which fell partly in the third quarter in FY18 compared with the fourth quarter of FY17, also increased demand for leisure travel compared with the prior corresponding period. Group Domestic capacity decreased by 1.9 per cent.

Qantas said the start of the Perth-London route, alongside the switch from Dubai to Singapore as the hub for Qantas’ second London service and a renewed partnership with Emirates that has enabled it to increase its trans-Tasman flying, would boost performance in its 2019 financial year.

Joyce added: “A large part of our earnings momentum is driven by ongoing investment in customer experience. Improvements to aircraft interiors, rollout of free Wi-Fi, changes to our route network and lounge upgrades are why Qantas and Jetstar have a strong place in the market.

“Our strong performance allows us to invest in more Dreamliners, which are a lot more efficient than the 747s they replace and give our customers a better experience. They also open up new network options and will be an important part of our success moving forward.”

READ MORE:
London-Perth the 'start of a new frontier' for Qantas
UA747 Farewell: United's last Boeing 747 takes off into the sunset
Boeing 747 approaches its final descent
Delta says goodbye to iconic Queen of the Skies