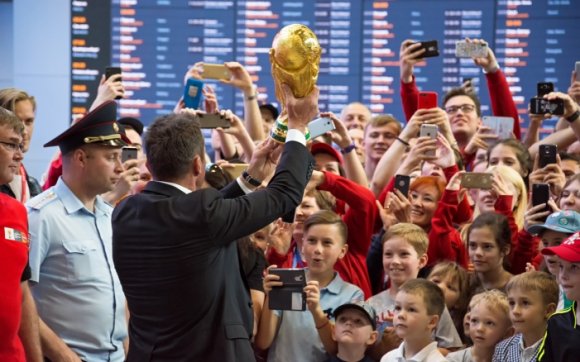 After eight years in the planning, the countdown to the 2018 FIFA World Cup is finally over.

Russia is hosting the world’s most prestigious football tournament over the next month, with 32 teams playing in 11 cities across the country. Supporters will visit Kaliningrad in the west, Volgograd in the south and Yekaterinburg in the Urals.

It is estimated that the nation has spent 683 billion rubles ($11bn) on preparations for the global sporting event, much of it on new stadiums and transport infrastructure. The government recently claimed the tournament would bring in up to $30bn.

The World Cup comes at a time when Russia’s economy returned to growth of 1.5 percent last year on the back of higher oil prices. Its aviation sector is also growing again despite suffering the effects of geopolitical issues in recent years.

Total scheduled capacity in the Russian market topped 134 million available seats in 2017, with the balance tipping 51-49 percent in favour of domestic capacity. The country’s home market has experienced consistent steady growth since 2010, aided by state subsidies to low-cost carriers which have been able to offer very cheap intra-Russia fares.

However, the international picture is mixed. After growing sharply between 2009 and 2014, the market declined in 2015 and 2016 before rebounding last year. In 2017, 66 million two-way seats were available on international routes.

Looking at figures from OAG Schedules Analyser, Russia’s domestic capacity is expected to grow by about 2 percent this year to 69.7 million seats. Its international market is also set for growth of about 12.6 percent to 74.6 million seats.

Capacity in Russia’s international market grew by 17.8 percent in 2017, schedules data shows, and is on track to grow by a further eight million seats this year. So which markets are driving the growth?

Ukraine was Russia’s largest international market in 2017 despite the ongoing tense diplomatic relations between the two counties. Capacity surged by 42 percent in 2015 before dropping 12 percent in 2016 and remaining largely static last year. In 2017, more than 5.3 million two-way seats were available.

However, while passengers could fly to 12 airports in Ukraine during 2014, in 2017 services were available to just one. The move to add large amounts of capacity to Simferopol International Airport, while cutting ties with other airports in Ukraine, can be seen as part of Russia’s effort to show solidarity with Crimea.

Elsewhere in the list of Russia’s largest international markets, Germany remains second after growing by 15.5 percent in 2017, reversing two years of declining capacity. Turkey jumped into third place after capacity between the two countries accelerated by a huge 143 percent, while China was the fourth biggest market and Italy fifth.

Russia-Turkey was the star performer in 2017 after adding 2.7 million seats. This coincided with Vladimir Putin, the president of Russia, lifting a range of travel and trade restrictions imposed after a Russian warplane was shot down over the Syrian border in November 2015.

Data from OAG Schedules Analyser shows that capacity between the two countries is set to rise by a whopping 54 percent in 2018 to more than seven million seats.

AtlasGlobal has a 22 percent capacity share of the Russia-Turkey market, followed by Turkish Airlines with 19 percent and Nord Wind with 16 percent. New routes added this year include Kazan International - Gazipaşa-Alanya, Rostov-on-Don - Dalaman and Pulkovo - Milas-Bodrum.

Portugal ranked as the second fastest-growing international market, albeit from a much lower base than Turkey. Russia-Iran was third with 67.9 percent capacity growth in 2017, compared with 2016, while Estonia and Tunisia completed the top five.

Winning the World Cup bid has provided a catalyst for a state-backed infrastructure programme. Stadia improvements aside, much of the money has been spent on airports and transport projects.

Moscow’s Sheremetyevo Airport has undergone a massive $722m transformation, with its new 110,500 sq m Terminal B having the capacity to handle 20 million passengers per year. The first stage of the new Terminal C, covering 116,000 sq m, is also under construction.

A new runway is planned for Domodedovo Airport while the former Zhukovsky military airport was last year granted a licence to receive international flights. Elsewhere, Platov Airport in the southern Russian city of Rostov-on-Don was opened last December.