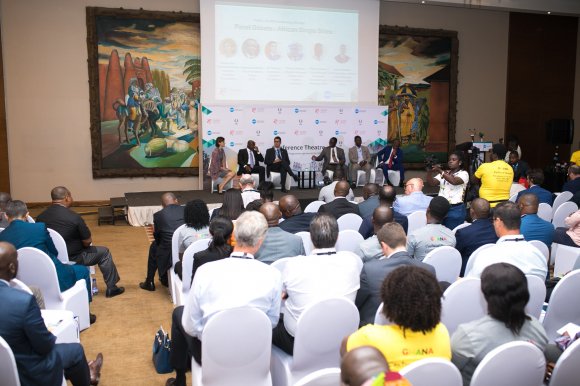 African airlines should work together in order to compete better with airlines from outside the continent.

He added: "If we organise ourselves as African and our carriers are allowed to work together... we can then compete with airlines coming into Africa.

"Let us focus on doing the interior of Africa and doing it well and that will give us the basis to be able to compete."

Perhaps one of the best places airlines could combine forces is on trying to get aviation taxes lowered which all the panel agreed were currently too high.

However, Ghana Airport Company managing director John Attafuah said it is not the airlines that suffer the brunt of the taxes.

He added: "We charge one of the highest (tax rates) but that is not paid by the airlines, it is paid by the passengers."

OAG international business development manager Mory Camara agreed, adding: "Aviation is an economic driver, they need to look at taxes and pricing as it costs $400 to fly for an hour from Accra to Lagos. Flying is still expensive so we need to look at all the charges."

Camara also predicted that the African continent is set for a rationalisation of its airlines that currently number at about 100.

He added: "We've got too many airlines, about 100 are registered in Africa. In the next few years we'll probably see about four or five big airlines emerge.

While the panel also welcomed the idea of some African hubs emerging, none thought it would happen any time soon.

Kuuchi said: "Creating hubs cannot be done by an individual state, it has to be done by a network carrier. Unfortunately many African carriers are so small that they operate a very small network; therefore it makes it very difficult to make their business a hub."

ACI Africa secretary general Ali Tounsi added: "It is a good idea but in the end it is unlikely. You can dream but the reality is different when everyone is thinking of themselves."