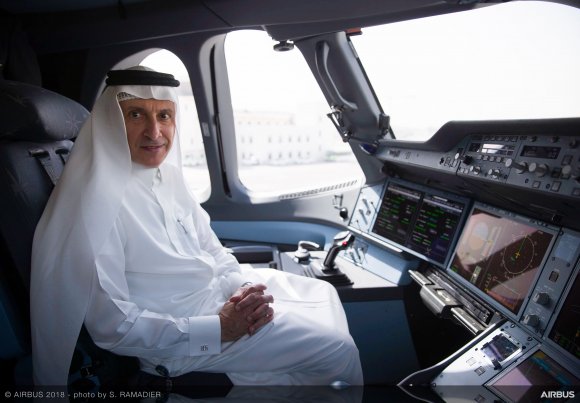 On June 5, 2017, four Middle Eastern countries imposed a blockade on Qatar. Following allegations that the country was supporting terrorism by having too close relationships with Iran and meddling in their affairs, Bahrain, Saudi Arabia, the United Arab Emirates and Egypt cut all diplomatic, trade and transport links with the Middle Eastern state.

Saudi Arabia also shut the only land border with Qatar, and more than a year later the dispute rumbles on with little sign of resolution.

While the blockade was felt at all levels of Qatari business and society, arguably one of the biggest victims of the move was Qatar Airways, which overnight lost connections with four of its closest neighbours.

Speaking to a select number of UK journalists in Qatar, the airline’s CEO Akbar al Baker says Qatar Airways lost 19 routes and about 60 flights a day.

While he is proud that the airline was only briefly forced to ground some narrow-bodied aircraft before IAG leased them and not a single member of staff lost their job, he admits that the loss of the routes was costly and will take time to replace.

Al Baker says: “It is not how many, it is how fast we can get those routes to mature. In our business, when you start operating a route it doesn’t mean you’re going to make money in the first year – it’s a long-term investment.

“Unfortunately, the routes that we stopped, or that we were forced to stop, were very mature routes where we were flying for many years and we had really developed our brand in those markets. Now, to develop our brand in the new markets will take some time.”

Frustrations of the blockade

In the meantime, though, al Baker remains frustrated by the seeming inactivity of the International Civil Aviation Organisation (ICAO) and its position regarding the year-long blockade.

He says: “I am extremely disappointed at ICAO’s reaction to this very important matter. What ICAO has done is taken a back seat in all this.

“[They should] demand from the blockading countries that they have to, without delay, open their airways because they are violating international routes and international laws, which ICAO are not doing. This is their mandate to do, as they are the policeman of airspace.

“We don’t see any light at the end of the tunnel because the blockading countries are adamant that what they are doing is correct. The international community should stand up and say it is not correct.

However, even now al Baker is concerned that the slow response to the blockade could mean that they crop up elsewhere around the world.

He adds: “This whole blockade is creating a precedent that when you have a dispute with somebody, you just blockade so they submit to what you want them to do.

“You don’t blockade a country because a country is not complying with your political requirements.”

In the meantime, al Baker has not ruled out Qatar Airways taking money from its owner, the Qatari government, to stay afloat. He has previously admitted the airline made a “substantial” loss for the financial year ending 31 March  2018, with the blockade blamed for much of it.

Al Baker comments: “To me, after posting a profit of half a billion, even [a loss of] 50 million is substantial, no matter how small it might be.”

“Similarly, we do not have the privilege the carriers across the Atlantic have – that when they are in trouble they can clean their books by Chapter 11 [which permits reorganisation under US bankruptcy laws].

“I don’t have that, so of course it is obvious that I will go to the owner of the company and ask for this capital injection. At the moment, I don’t need it, but if this blockade continues, I’m sure our government will be prepared to inject that capital because Qatar Airways is a very important economic tool for my countryand is a major requirement for its 2030 vision and its progress.

”However, he adds that any cash injection is still some time away and the imminent release of the accounts will prove the airline has a strong cash balance.

The US is a target, with new routes for San Francisco and Los Angeles announced, while Detroit is looking likely to be introduced, though this depends on the US economy. Airbus A350s and Boeing 777s are the metal of choice for the routes.

Meanwhile, the reintroduction of the flights to London Gatwick using a Boeing 787 Dreamliner aircraft in May brings the total number of flights to the UK to 95 per week this summer. Al Baker adds that Belfast International Airport is also under consideration by the airline but says it is too early to say when operations might be introduced and with what frequencies.

This is despite growing fears in the UK that Brexit, which is due to take effect in March 2019, could lead to chaos in the country. Al Baker says: “There could be a hiccup in the early days of Brexit, but Europe needs Britain and Britain needs Europe. There is so much cross-border trade which cannot be replaced.

“I really think that both sides are posturing to see how much damage [will be done] to each other, but in the long run everything will go back to normal.”

To this end, he adds Qatar Airways will keep its 21 percent stake in British Airways owner IAG, which he describes as “strategic”.

Elsewhere, al Baker faces problems familiar to many carriers as governments seek to protect their own airlines through various strategies.

“The problem is not with our government – the problem is the protectionist policies of certain governments that do not want us to come and put a strain on their national carriers.”

However, al Baker is hopeful that they may yet change their stance, adding: “When your national carrier is weak, for economic development you need connections with the outside world.”

When it comes to the fleet, the year-old QSuite is al Baker’s pride and joy – to such an extent that first class is being pulled from every aircraft other than Qatar’s ten Airbus A380s. And he has no plans to grow the fleet of mega-jumbos – nor will he buy any more of them until they are at least 10 percent more fuel efficient, and any new aircraft will replace those already flying Qatar livery.

Al Baker is also confident that despite the problems he is facing, the airline will overcome them and believes that there are more than enough customers to satisfy everyone.

“I don’t believe in deploying so much capacity that will undermine other carriers,” he adds. “There is enough business to go around and you should operate in other markets where you are not undermining other national carriers.”

And when al Baker puts it like that, it seems entirely reasonable. Perhaps the airline’s biggest problem is whether or not the state of Qatar can convince its blockading neighbours and countries further afield to come to an amicable agreement.