The airline is introducing flights to six US destinations, extending its network to Florida's Orlando International Airport, St Pete-Clearwater and Miami as well as to Palm Springs, Las Vegas and Phoenix-Mesa Airport.

“Having brought low fare service to ten Canadian cities this summer, we are now taking the show on the road and heading south to some of the most popular winter getaway spots. Escaping the great Canadian winter will cost a lot less this year.”

The majority of services will begin on 15 December 2018, but Edmonton to Las Vegas will start on 9 November. 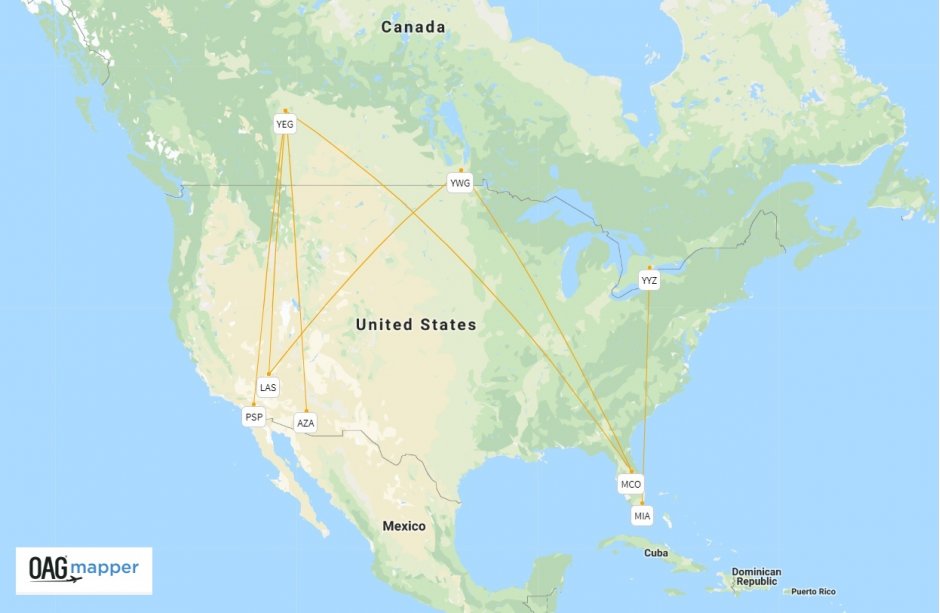 For the winter schedule, Flair has also announced increased domestic service with new routes between Toronto to Winnipeg (daily) and Calgary to Abbotsford.

David Tait, Flair's executive chairman, said: "The decision to move all of our Southern Ontario operations to Toronto was a difficult one for us. We have greatly enjoyed partnering with Hamilton airport and anticipate a return."

Flair will face direct competition on seven of the 11 new routes to the US, according to data provided by OAG Schedules Analyser.

WestJet is the sole competitor on three (YEG-MCO, YEG-PSP, YWG-LAS), while it also operates YWG-MCO and YYZ-MIA alongside Sunwing on the former and American Airlines on the latter.

“Swoop's success in the Canadian ULCC space combined with the evident success of ULCCs in the US affirms that North American travelers are ready for an airline to open up the border to ultra-low-cost air travel,” he said.