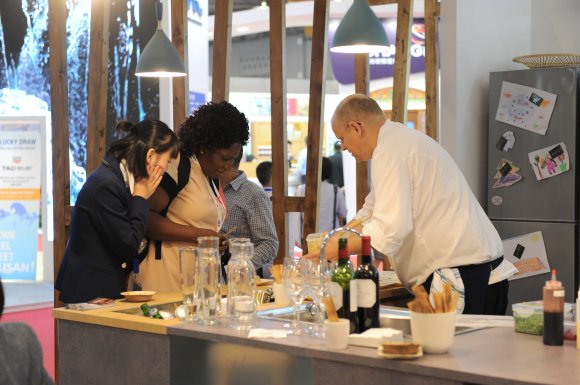 Hanne Kjølhamar, acting director of aviation marketing at Avinor, tells Routesonline why it was voted as the delegates’ favourite exhibition stand at World Routes in 2016.

Describe your stand the year that you won the award for Best Stand at World Routes?

We challenged the way we thought about what a stand should be; from being a traditional, functional meeting space to a welcoming kitchen with a large kitchen table, well suited for sitting down, sharing Norwegian food in a state-of-the-art kitchen prepared by professional cooks - and sharing stories leading to good conversations. The atmosphere in Norwegian kitchens are relaxed and cosy, and we wanted to recreate this atmosphere.

Where did you take inspiration from in the design of your stand?

The inspiration process was like a journey, it all started when presenting a new picture of Norway to our airline contacts: landscapes, markets, innovation and start-up culture, all with a modern twist – which led to the Norwegian kitchen idea. Our kitchens are often described as the heart of our homes; it is in the kitchen that we prepare and share meals, have the time to sit down and unwind from a hectic everyday life and be friends and family. Everything from good stories to serious themes are shared over our kitchen table; this was the inspiration for the design of our stand and that we wanted to recreate and bring to World Routes.

What do you think was the key thing about your stand that lead to delegates voting for you as their favourite?

We believe that the key thing was that we were able to create a relaxing stand, almost a bit disconnected from the buzz and busy times that are characteristic of all conferences. As our stand was so well received in 2016, we have brought it back to various Routes events since and feel we have become one of the hot spots for people to congregate at during Routes events.

Aside from winning the award, what benefits did you see from designing your stand in the way that you did?

With the Kitchen we were able to show other sides of Norway, not only focusing on traffic and route development but showing more of what Norway has to offer; sharing food tradition as well as more modern food, Norwegian furniture and design. Norwegian designers are known for bringing nature into the homes and we replicated this by using light wood, green plants and lighting. We also believe that having an attractive and memorable stand is a great way to capture people’s attention and begin conversations that could lead to business partnerships.