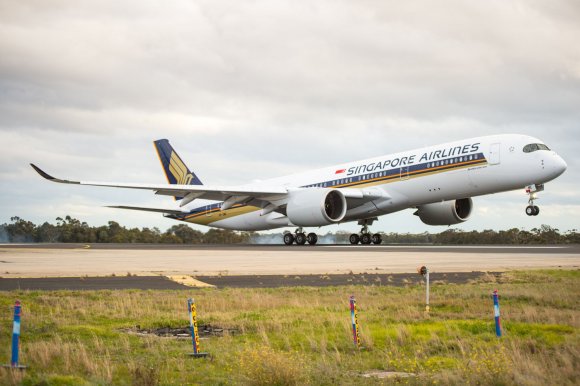 Launching on 18 December 2018 from Adelaide, subject to regulatory approval, flight SQ278/279 will be operated daily by the two-class, 303 seat A350-900, providing South Australian customers first access to “an unparalleled level of comfort and technology”.

The Business Class cabin boasts a 1-2-1 seat arrangement, providing every customer with direct aisle access, while the Economy Class cabin will be arranged in a 3-3-3 configuration.

Philip Goh, Singapore Airlines regional vice president, South West Pacific, said it was exciting that Adelaide had been selected as the launch destination ahead of the airline’s 35th anniversary of operations to the city.

“We have proudly operated services to Adelaide since 1984 and the deployment of our first A350-900 medium-haul aircraft with our new medium-haul cabin products to the South Australian capital is an exciting new chapter in our 34-year history,” he added.

Finnair held a 100 percent stake in the carrier after its previous owner, which held 60 percent, decided to exit the business in November 2017. It will retain its 40 percent share.

“Finnair’s and Norra’s partnership model in domestic and regional purchase traffic has served us well, and the Danish Air Transport will strengthen the partnership even more,” said Jaakko Schildt, Finnair’s chief operating officer.

“They have solid experience in operating regional traffic with an ATR-fleet.”

The transaction requires approval by the Finnish Competition and Consumer Authority.

The service, which is expected to launch in the coming months, will connect easyJet customers with Singapore Airlines via Milan Malpensa airport and with Scoot through Berlin Tegel.

Worldwide by easyJet is designed to replicate traditional interline and codeshare agreements with self-connect and sales partnerships through a digital platform.

“Over half of easyJet’s flights and 53 million easyJet customers will soon be able to connect to airline partner services and other easyJet flights in a single booking through our online portal.”

Second quarter profits rise at AirAsia
AirAsia Group’s net profit surged by 147 percent to 361.8 million ringgit ($87.1m) in the quarter to June 2018 as revenue rose 10.3 percent to 2.62 billion ringgit ($631m). However, the profit growth was mainly thanks to a one-off tax benefit from the sale of aircraft last year.

The group said that demand remains strong and load factors are healthy but it continues to face headwinds, in particular high fuel costs and weakening regional currencies.

“Barring any unforeseen circumstances, the Board remains positive that the overall results of the group in 2018 will be favourable,” it added.

Four of the national carrier’s new Boeing 787-9s are being based in Brisbane, as the aircraft gradually replaces the 747 on key routes. Dreamliner services from Brisbane, the host of Routes Asia 2018, to Hong Kong will start in December, with other destinations to follow.

“We’ll have 120 cabin crew and pilots based in Brisbane to operate the Dreamliner flights and a further 350 indirect jobs are expected to be created as a result,” he added.

Ghaith Al Ghaith, chief executive at flydubai, said: “In its first nine years of operation much has been achieved to firmly establish flydubai as an intrinsic part of the aviation industry.

“We have continued to see a tough trading environment and the half-year results reflect these short-term challenges.

“We continue, however, to invest in our fleet, network and operations recognising opportunity as we look to the future.”