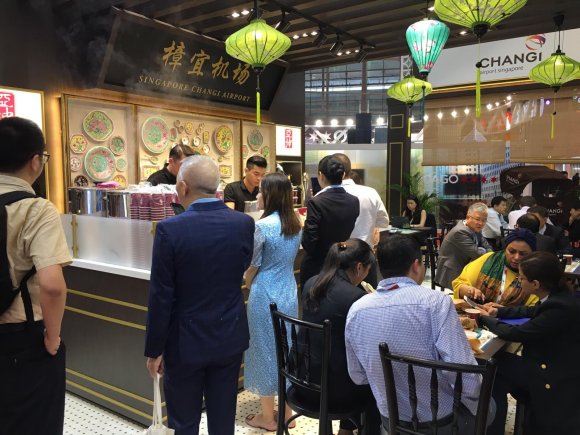 For the first seven months of the year, India led the gainers among Changi’s top markets, with a 13 percent year-on-year growth. China, Changi’s second largest market, registered an 8 percent growth during the same period. Changi established new city links in Guwahati (India) and Nanchang (China) earlier this year, increasing Changi’s connectivity to a record number of 16 cities in India and 36 cities in China.

Over in Europe, Changi also welcomed new city links Berlin and Warsaw, with services operated by Scoot and LOT Polish Airlines respectively. Today, Changi is the only Southeast Asian airport with links to these two cities. The resumption of Singapore-Munich services by Lufthansa and return of Qantas’ Australia-London services via Singapore has also increased Changi’s connectivity to the region. Europe has registered a 15 percent year-on-year growth in passenger movements for the first seven months of this year.

On the cargo front, SF Airlines began a weekly Singapore-Shenzhen service earlier this month, increasing main deck airfreight capacity on the route by about 16 percent.

Later this year, Changi Airport will be welcoming Singapore Airlines’ non-stop service between Singapore and New York in October – the world’s longest commercial flight, and their Singapore-Los Angeles service in November. These services will strengthen Singapore’s position as a transfer hub, for travel between Asia and the United States.

Vancouver and Chicago, both ultra-long-haul routes, are among Changi’s top new link targets. These routes are now made more viable with the latest aircraft technology like the B787 Dreamliners and Airbus A350s.

Following the new European city links established earlier this year, CAG is keen to explore direct links to Brussels, Madrid, Oslo, and Vienna – all of which have strong origin-destination demand with Singapore and the wider Southeast Asia and Southwest Pacific regions.

For the Central Asia region and Russia, Almaty and Vladivostok are two key links that CAG is working to establish. With growing business and trade links between Singapore and these destinations, as well as demand for leisure travel to these exotic cities, we have observed stable growth in origin-destination demand. Closer to home in Asia, CAG is working on growing our connectivity to China and India, to the cities of Taiyuan and Pune.

With the prospect of strong aviation growth in the Asia-Pacific region in the coming two decades, Changi Airport Group is keen to pursue route development opportunities with our airline partners, and ride on this projected growth.