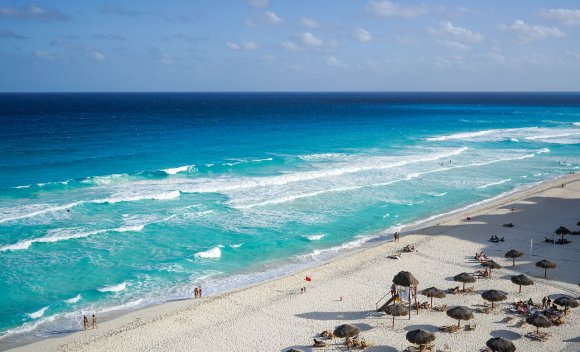 GOL Linhas Aéreas Inteligentes is to open a non-stop route from Brazil’s capital city Brasilia to Cancun, the Mexican holiday destination, from June 2019. The four-weekly service will operate on Mondays, Wednesdays, Fridays and Sundays with the low-cost airline’s new Boeing 737 MAX 8 aircraft. The launch of the route comes as traffic between Brazil and Cancun continues to rise. According to figures from Sabre, the total O&D market was 313,690 in 2017, up from 245,931 during the previous 12 months. During the first six months of 2018 it rose to 176,362, up 16.4 percent compared with the first-half of 2017. In addition to the new Cancun service, GOL plans to fly from Brasilia to Miami and Orlando on 4 November 2018, and a service between Brasilia and Buenos Aires will launch on 1 December. The direct link to Cancun will become Brasilia’s only one to Mexico.

Canadian carrier Air Transat is adding Split in Croatia to its transatlantic flight programme. Starting in the summer of 2019, the leisure route is scheduled to operate from 20 June to 13 September using Airbus A330-200 aircraft. It will depart Toronto on Thursdays and Split on Fridays. Traffic between Canada and Croatia has been steadily growing in recent years, with total two-way capacity increasing from 11,730 available seats in 2016 to 71,532 this year. Air Transat began flying to the European country in 2016 with a weekly Toronto - Zagreb summer service, which was increased to twice weekly in 2017. Air Canada also resumed operations to Zagreb from Toronto this summer with a four-weekly service. The flag carrier last served the market in October 1991. Croatia is predominantly an outbound leisure market for Air Transat, sold through its tour operator arm. It will be interesting to see how many new European leisure routes Air Transat opens once it takes delivery of its first A321neo LR aircraft from next year.

US carrier Delta Air Lines is introducing a daily service from Boston Logan to Lisbon in Portugal from next spring. The airline plans to operate the route from 23 May 2019 to 3 September using Boeing 757 aircraft, equipped with 20 seats in Delta Premium Select, 29 seats Delta Comfort+ and 150 seats in the main cabin. Delta in its summer 2018 schedule operates two routes to Lisbon, from Atlanta and New York JFK, with the latter continuing in its winter 2018/19 schedule. Portugal’s capital city is also served by United from Newark, while TAP Air Portugal operates three routes from Lisbon to the US: Boston, Newark and New York JFK. Greater Boston has a large Portuguese community and this new service will provide a link for residents on both sides of the Atlantic.