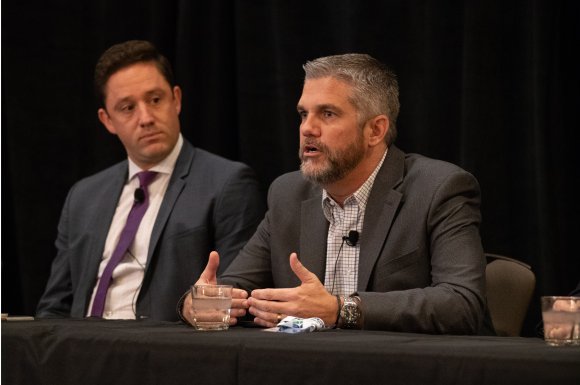 What was the secret of your success?

For Myrtle Beach International Airport the importance was looking at alternate data. Whether that consists of hotel data, by month, by zip code, second property ownership, golf rounds played by month, migration trends; it’s all about how many people are coming into the market. We look at overall demand and have about a 10 percent sample of where people are coming from.

Instead of looking at O&D data we look at the strength of our brand and identifying where our brand is strongest. We have almost 20m annual visitors to the destination, so we know the brand is really strong, but when you look at the historic O&D data we don’t have a good track record with many markets. So we started digging into the strength of the brand and saw commercial opportunities with airports that either did have commercial service or could have commercial service, and we started taking that message to airlines.

It’s about pulling it all together and knowing where to get that data; obviously technology has improved and made it a lot easier to get that big data.

What impact has your strategy had on the airport?

When I started at Myrtle Beach we had about 15 million annual visitors and the airport only accounted for about 5 percent of that. Now we’re up to almost 20 million and capture about 8 percent of that market, based on our growth.

Our approach has had success with most of our airlines and we’ve grown since 2013 from six to 10 carriers, and from about 22 to 49 non-stop markets. We’ve grown from pretty much a summer market into a spring-summer-fall market. And now due to the fact we’re able to show demand trends by market, we’re actually starting to see growth in winter with air service.

What’s most important when speaking to airlines?

It’s important to make the business case. We can go through the accolades such as most affordable, most family friendly, but we need to show the airlines how they make money. We’re showing them where the demand is region-by-region, market-by-market, and we also show them the opportunity to grow ancillary revenues, so it’s important to treat it as a business.

We offer what most airports do, for example some waived fees and marketing assistance, but truly where the marketing support comes from is the Myrtle Beach Chamber and Golf Tourism Solutions, two of our partners.

Nominations are now open for the Routes Americas 2019 Marketing Awards! The awards are highly regarded as the most prestigious in the industry as they are voted for and judged by the airline network planning community. Voting closes on Friday 14 December 2018.

How do you engage stakeholders from across the destination?

I go out regularly to meet them. It’s not an easy thing to do; it does take a lot of education. People don’t understand air service development; they just think that you ask for an airline and you get it.

If that was the case we’d have every single market from every single airline served from Myrtle Beach! So we really have to provide education about what the airline network planners are looking for and really ensure that our interests are aligned with our partners’.

For example we have about 100,000 hotel rooms and initially they were the keys to understanding trends of when people are coming in and from where; they’re the ones who want service in the spring and the fall when the season is soft.

We had to explain that an airline is not going to grow in the soft season when they can’t make money in the peak season. But for us to get there we need to understand the trend in each month and where people are coming from. So now we have 29 hotels that now share their reservation data with us from the zip codes, group size and check-in date.

It’s a hard slog but that’s how you have to do it. You have to keep digging and digging, and pushing and pushing, and eventually somebody’s going to help. In turn I take all that data, combine it, and share it back with them, so they get something out of it and are actually learning something about their market. They actually have the data but they weren’t looking at it in the way we’re looking at it.

What does winning the Routes Americas marketing award mean?

Being nominated is fantastic; it shows that what we’re presenting to the airlines is well-received. First they were showing that the data is helpful because they’re growing the market, but now to be recognised for the award shows that the efforts we’re putting into this alternate data is really being viewed as beneficial by the airlines.

What are your future route development targets?

Of our 10 carriers the majority are domestic, and we have two Canadian carriers; Porter and WestJet.

So what’s most important is that we grow with the carriers that we have and start to branch out slowly and increase the stage length. There’s huge areas of opportunity still in the north-east and west of the Mississippi for Myrtle Beach.

That doesn’t mean international routes aren’t an area of focus for us; there’s growing demand from Europe and South America growing. There are some unusual trends that we see from some of these markets where you would expect them.

We actually do HQ meetings together and they go into the marketing component of how they are going to promote the destination and the brand Visit Myrtle Beach, and how they’re going to infuse the airline name into that message. I’m not involved, but it’s about that partnership. When we get so far down the road that we’re going to announce the route we do a HQ meeting where the team gives the strategy.