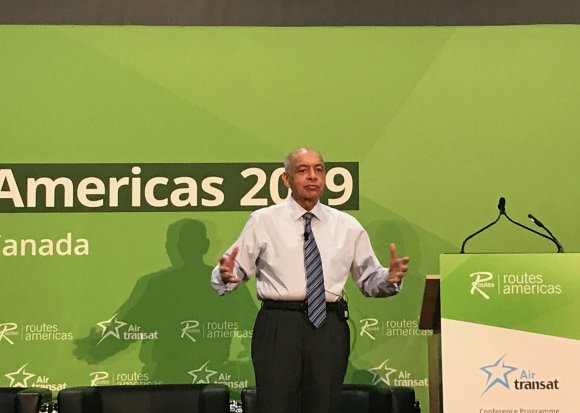 Smaller airports are going to play a much bigger role in the coming years thanks to aircraft technology and consumer preferences.

That was the message at Routes Americas 2019 from author and aviation expert Nawal Taneja, who has worked for and advised major airlines and related businesses worldwide.

In an enthralling presentation about the future of the aviation industry, he said that four main forces would drive change. They are consumer preferences, technological advances, the complexities of the industry, and new disruptive competitors.

“All the forecasts I see are that all the major airports around the world will continue to remain congested but I beg to differ,” said Taneja.

“Driverless cars will replace some of the short-haul air travel, while the hybrid electric aircraft will also have the same impact.

“Even if that takes the pressure off an airport by 5 percent then you’re no longer congested.”

Taneja added that the development of long-rang narrow-body jets, like the Airbus A321neo, is already having an impact, meaning that the traditional hub and spoke model is less relevant.

“If you can fly from points in North America to South America, why do you need to go through Miami? Does that mean Miami will disappear? Of course not!

Qantas launched non-stop flights from Australia to the UK in March 2018 and Taneja believes the advent of ultra-long-haul routes will also change the industry.

He said: “Ultra-long aircraft are also flying direct non-stop from Perth to London Heathrow and will do from other cities in Australia like Sydney and Melbourne. So why do you need to connect via Singapore or Hong Kong? You don’t.

“That does not mean that airports like Singapore and Hong Kong will become tiny. But the connections have changed. Growth will not come from the larger cities like Sydney, Perth and Melbourne, but from smaller ones like Cairns. Smaller airports are going to play a much bigger role.”

Speaking about airline competition, Taneja believes there will be about ten global airlines that will emerge as brand leaders. “They will finally be known as the Apples, the Googles of the industry,” he said.

“The rest will be divided into two groups. One is the followers, which will follow the ten. They will be very good, but they won’t have operational excellence and innovation. They’ll have one or the other, but not both.

“The last group is the bystanders. Now they’re not going to disappear, but they’ll just stand and watch what happens. They’ll continue to lose money but they’ll still be there. I have another name for them - irrelevant.”