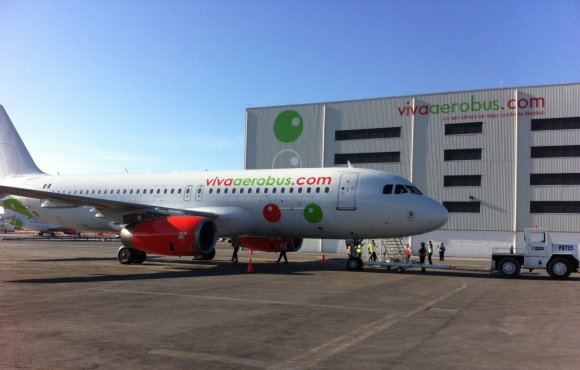 Speaking to delegates at Routes Americas, Estrada outlined the airline's strategy to grow through upgauging while continuing the process of educating a market that can be sceptical of air service to help stimulate new demand.

The airline has 31 aircraft - all 180-seat Airbus A320s. It has committed to 55 more - including 41 A321neos. The larger Airbus narrow-bodies will have 240 seats, and the airline is interested in converting more of its outstanding A320 orders to the higher-capacity variant.

"This is the way you keep costs down," Estrada says.

The A321s will be used where upgauging makes the most sense, including in resource-constrained Mexico City. The airline, which has about 20 percent of the Mexican domestic market and grew available seat miles 21 percent last year while remaining profitable, will continue to focus on the domestic market, citing the wealth of opportunity it presents.

Launched by IAMSA, Mexico's largest bus company, VivaAerobus thrives by getting passengers off of bus routes for the first time. But it's not easy.

"Mexico is a different country," Estrada says. "People don't care about going five hours, 12 hours" on a bus. "It's not only the money -sometimes the bus ticket is more expensive. But it's the mentality--the idea of going through airport security, the airport itself."

VivaAerobus leverages this by doing a lot of up-selling and cross-selling with its bus-lines partner. The airline sells about 20 percent of its tickets through the bus company's distribution network, and most of them are bought in cash.

Many Mexicans do not have bank accounts, which presents further ticket-purchase challenges. Leveraging the bus company's distribution network and other physical outlets, such as convenience stores, helps counter this. VivaAerobus is also working to increase ticket-sales options through electronic wallets that are popular among Mexicans.

The carrier has not ignored traditional mobile sales, however. Since releasing its app two years ago, sales through its mobile channels have risen to about 10 percent. "It's growing faster than we expected," Estrada says.