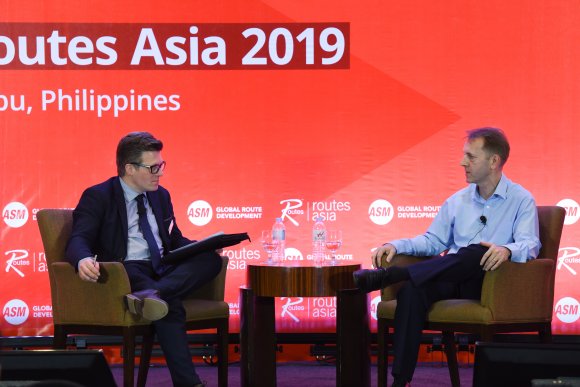 Tourist boards need to work more closely with airlines to help sell the destinations they represent.

Speaking at Routes Asia 2019 in an on-stage interview, Jetstar executive manager commercial planning Alan McIntyre said getting good-quality, original content from the boards can help sway consumers' minds when they consider a destination.

He added: "What is the essence of this destination? That is what we want to hear from the tourist boards and we want to put it on our website."

McIntyre said airports also need to lend their support, particularly in the initial ramp up period. He said this can take the form of financial support and competitive ground handlers that understand an LCCs needs.

Similarly, governments need to resist the urge to raise taxes, a problem seen all over the world he admitted.

He added: "We are putting a very expensive asset into a market and we are stimulating that market. (They need to) encourage us to put assets into that market rather than another market."

McIntyre also said the airline is keen to know passengers can clear security quickly too with this acting as a shared benefit for both parties; the airline will see happy customers boarding its flights while the airport will benefit from more time spent amongst the airside shops.

He added Jetstar has got its eye on growing its network in a number of countries with Japan, where it currently has three bases, on the list.

Elsewhere, he said both Thailand and India are also on the list thanks to growing demand in the market.

McIntyre added: "Across Asia there is demand coming into the market over the next several years so it is really about working with airports, tourist boards and governments to make sure we can get the right customer base."

He also said the airline was keen to grow its Jetstar Holidays tour operator business, adding: "We are in that game but we think there's a lot further we can go."