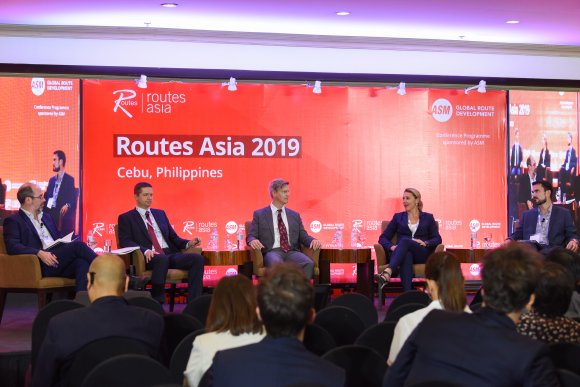 Countries across the Asia Pacific region need to fully apply World Slot Guidelines (WSG) in order to ensure that demand does not outstrip capacity. That’s according to Philip Ireland, IATA’s manager for Worldwide Airport Slots.

Speaking on a panel session at Routes Asia 2019 in Cebu, he said there are about 300 congested airports globally. Of the 200 most congested, roughly half of them are in Europe.

“Asia has the strongest growth potential of any region in the world and so the challenge is not to follow in Europe’s footsteps. The challenge is to get capacity out there now and as fast as possible,” he stressed.

“But the biggest challenge we have is ensuring there is a global solution. With any route, there’s an airport at both ends.

“Right now there are a certain number of airports which are doing their own processes unilaterally. What we really need is a single consistent adoption of the Worldwide Slot Guidelines.”

Fellow panellist Stephen Milstrey, the general manager for network planning and scheduling at Hong Kong-based HK Express, outlined the difficulties of trying to build a network from one of the world’s most-congested airports.

He said that the airport’s answer seems to call on airlines to add capacity, but HK Express’ niche is operating unserved routes, which cannot be done profitably with a wide-body.

“We have some really great slots at an airport this summer season, but we had to give half of them back because we couldn’t get the required slots on the Hong Kong side to make it work. It’s a huge problem to have.”

Yarrow admitted that the airline is often forced to accept “sub-optimal slots”, which can mean aircraft are left on the ground for a considerable time.

However, Christensen said that cannot just expect to get a slot whenever they want one. “Carriers need to work with the airport to find out how constrained they are; what their constrains are; and what timings can you expect,” she explained.

“They you sometimes just need to accept it. If you start the route, you can the work to improve your timings from there. We have been able to develop in congested airports in Asia but you need a five-year plan.”