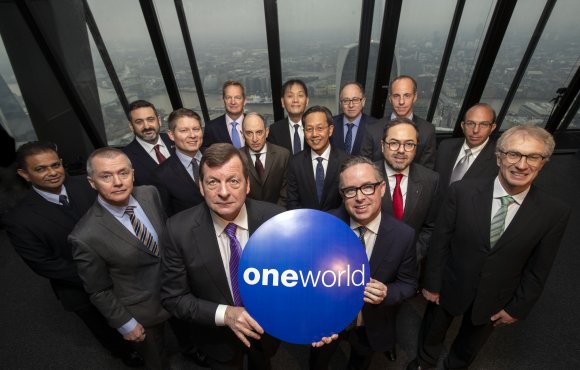 Anniversaries are usually a cause for celebration, strengthened by a show of solidarity.

But when the CEOs of oneworld’s member airlines gathered in London to celebrate the alliance’s 20th birthday, it seemed to lead to more questions than answers over what the future membership might look like.

Chief among them was the future membership of Qatar Airlines, which has had a series of arguments with fellow members including American Airlines and, most recently at the end of last year, Qantas.

When asked by a journalist on his future commitment to the alliance, al Baker replies: “I’m here today so you can say today we are all together as a team. We will be here as long as we can work together and see if we can resolve the issues and differences we have. Only after that will we see what we can do.”

He then left the press conference shortly afterwards and was the only person on stage to do so, although oneworld’s press officer did warn beforehand that some CEOs would leave the event early due to responsibilities elsewhere.

While Qatar’s future membership may be in doubt, further confusion has been created by China Southern Airlines, which quit rival alliance SkyTeam at the start of the year to “better align with the new trend of cooperation models”.

With an announcement on January 2 from Qatar Airlines that it had acquired a 5 percent stake in the Chinese carrier on December 28, journalists were keen to know if that could lead to a membership application.

However, oneworld CEO Rob Gurney says: “We have a fantastic Chinese airline in oneworld which is Cathay Pacific. China Southern as a non-aligned airline to develop partnerships with a number of oneworld members. I can’t talk specifically about those discussions, as they’re between carriers.”

Nor is Gurney overly concerned about member airlines developing deep partnerships with those outside the oneworld sphere. He even admits the alliance may have to further change its own structure if it is to accommodate the changing working practices of the world’s airlines.

He adds: “One of the things about oneworld is we are far more flexible than other alliances in allowing partnerships. We don’t live in a perfectly symmetrical world where everyone’s commercial interests are going to be served by exclusively partnering oneworld airlines so it’s actually important that we allow a flexibility for members outside the system.

“There’s nothing to say that going forward some of these service benefits that we provide through oneworld wouldn’t be provided via partnerships outside the alliance.”

It is these looser arrangements that may yet tempt back Aer Lingus, which joined in 1999 before leaving in 2006 when it focused on becoming a low-fare, point-to-point carrier.

Willie Walsh, the CEO of IAG which owns Aer Lingus, says: “One of the reasons Aer Lingus left the oneworld alliance was because of the complexity associated with being a full member. At the time it was difficult for Aer Lingus to justify as the airline expanded. The arrangements that oneworld has now put in place would now work for Aer Lingus, as they are much more suited to the business model that the airline has.”

However, he adds the airline is unlikely to rejoin any time soon as it is currently busy, having applied in December to join the existing transatlantic joint venture with American Airlines, British Airways, Iberia and Finnair.

Walsh says: “That’s a complex regulatory process they [Aer Lingus staff] have to go through and their intention is to focus on that at the moment.”

While the event may have seen plenty of conjecture regarding potential members, Gurney confirms two definite new members.

He says the signing of the alliance’s first full member in six years, Royal Air Maroc, means it now has its first African representative. Gurney says in doing so, oneworld has corrected a serious issue.

He adds: “This [not having had an African member] is not a tenable position for a global airline alliance. Particularly when you consider the forecasts that point to Africa being among the regions where air travel demand is expected to grow fastest in the coming decades.”

Gurney says: “We are progressing discussions with other airlines from various parts of the world including the Americas, Asia-Pacific and Europe that are interested in signing for oneworld connect.”

“This requires having a minimum of three sponsor airlines, so it’s much easier for the incoming airline to join. It’s also less onerous for the member airline to form relationships.”

While the future membership is certainly changing, Gurney was confident at the event that oneworld’s future is secure and announced a number of other measures, from new technology to a brand refresh.

And he added that such changes were on par for the alliance, which is always changing itself.

Gurney says: “Oneworld’s transformation does not stop here. This is only the start. Oneworld will continue to evolve and innovate to ensure the alliance continues to deliver value for customers and for airlines as it flies into its third decade and beyond.”