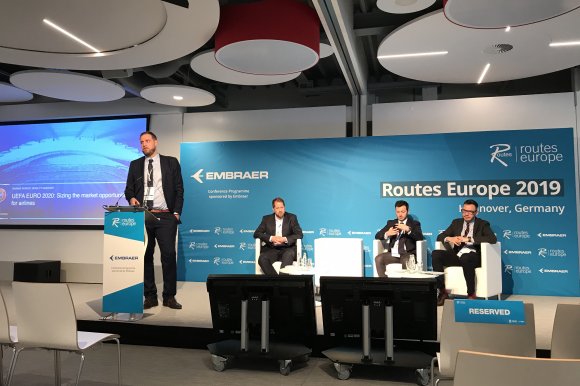 An additional two million air trips will be made during the UEFA Euro 2020 football tournament, presenting opportunities for airlines and airports alike.

That was the message from Thomas Perrot, the mobility manager for Europe’s football governing body UEFA.

Speaking to delegates at Routes Europe 2019 in Hannover, he said the organisation expects more than two million passengers to board a flight during the month-long competition in June 2020.

To mark the 60th anniversary of the competition, the UEFA Euro 2020 Final Tournament will be played in 12 countries across the continent.

The tournament includes 24 national teams playing a total of 51 matches with three million tickets expected to be sold.

“It’s a big opportunity for airlines to launch new routes and link host cities, as well as increasing frequencies on existing services that will be popular with supporters,” said Perrot.

“For airports, there’s an opportunity to increase revenues through concessions or with additional slots coming from private jets or charter flights.”

In addition to the UEFA European Championship, UEFA organises a cycle of major sporting events every year that are held throughout Europe, including the UEFA Champions League Final.

“The UEFA European Championship and Champions League finals are our two flagship events, but they are much more than 90 minutes of football,” added Perrot.

“When it comes to organising an event, we want to offer the best spectator experience possible. Transport is obviously a very important part of that; it’s usually the first and last impression of the event that the fans have.

“The big matches taking place across the continent are a huge driver of air traffic.”