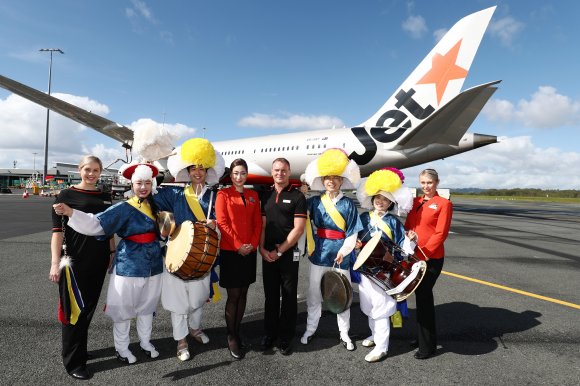 The Queensland airport said the route represents an additional 52,260 seats into the city each year and is forecast to contribute up to AU$176.5m to the region’s economy over the next three years.

“By introducing low fares to Seoul, we expect that South Korea will be a country that jumps to the top of many Australian travellers’ bucket lists,” said Jetstar chief executive Gareth Evans.

“We know from experience that low cost flights have a strong influence on setting tourism trends, which we’ve seen in markets like Japan where the number of Australian visitors has doubled since we first launched flights in 2007.”

Demand for inbound flights to Australia from South Korea is also expected to be strong. According to the latest figures provided by Tourism Australia, the number of tourist arrivals from South Korea totalled 288,000 in 2018, up from 198,900 in 2013.

“Research shows that South Korean travellers consistently rank Australia as the top destination they want to visit, but they were unlikely to travel without low-cost direct flights,” added Evans.

“South Koreans already travel more frequently than any other nationality in the Asia Pacific, so there’s no doubt they will take advantage of these new direct flights to Australia.”

“The Queensland government continues to build the state’s connectivity with Asia, which is such a vital market for our tourism economy,” she said. “South Korea is a high-priority market for Queensland and this new service will provide added capacity to an underserviced route.”

The market between Australia and South Korea is currently served by just two carriers - Korean Air and Asiana Airlines - operating a total of 18 weekly flights.

Low-cost carrier Jin Air has tested the market in recent years with seasonal services to Cairns in 2016, 2017 and 2018, while it also operated two charter flights to Gold Coast in April 2018.

However, Jetstar will become the first Australian carrier to serve South Korea non-stop on its own metal for more than a decade and the only LCC operating direct service. Subject to governmental approval, it will codeshare on the 7,800 km Gold Coast - Seoul route with South Korean budget airline Jeju Air.