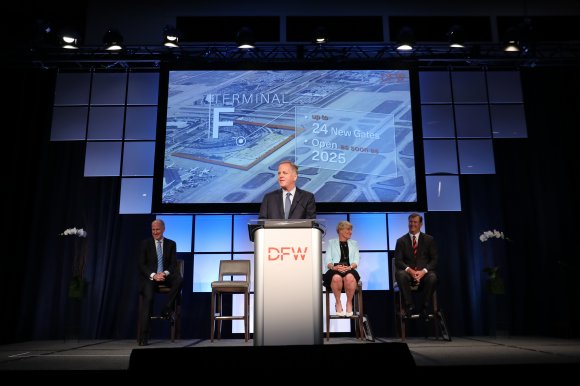 American Airlines and Dallas Fort Worth International Airport this week revealed plans to develop a sixth terminal at the Texas hub costing an estimated $3bn.

The massive investment could add as many as 24 gates, with the new terminal projected to open as soon as 2025. In addition to the construction plans for Terminal F, another $500m in improvements will be made to Terminal C.

“The new Terminal F and the expansion that could follow will provide the region with the growth it needs to compete with international business centres,” said Sean Donohue, chief executive of DFW Airport.

“The airport is growing faster than ever, and it needs to keep pace with the Dallas-Fort Worth economy to provide jobs and connections for businesses and families.”

The new Terminal F would sit south of Terminal D and design work is set to begin immediately. A joint statement added DFW and American plan to “explore several different options” for the new terminal’s layout.

Terminal C, meanwhile, is one of the airport’s original terminals and opened in 1974. DFW and American plan to “significantly improve” the customer experience, bringing it in line with Terminals A, B and E on which renovations were completed in 2018.

Doug Parker, American’s chairman and chief executive, said the expansion of DFW would ensure the airport “remains a premier gateway” for the carrier.

The airport is already the carrier’s largest hub by both seats and number of departures - as well as being its most profitable - and so the planned expansion would cement DFW as central to its future growth plans.

According to figures from OAG Schedules Analyser, it has in excess of 712,000 available departure seats on offer during w/c 20 May 2019, about 193,000 more than its second-largest hub Charlotte.

In 2018 American commanded an 84.34 percent share of all departure seats on offer from DFW, data from OAG Schedules Analyser shows, a figure that has been largely unchanged since the merger with US Airways in 2015. Prior to that, the airline accounted for about 82 percent of total capacity.

In recent years, its growth from the airport has been slowed by gate and slot constraints. However, after gaining access to 15 additional regional-jet gates in Terminal E, DFW will account for most of American’s growth this year.

By early June, the oneworld member plans to operate more than 900 daily flights from DFW, up from about 800 last summer. It is adding 23 new destinations and increasing flights to existing ones.

Chairman and chief executive Doug Parker described the addition of the 15 gates as “one of these once-in-a-lifetime opportunities” that will further build the hub and connect Dallas to a number of new smaller markets.

Speaking in April, American’s president Robert Isom said early results for the new routes and additional frequencies from DFW were “encouraging” as both bookings and yields were at rates higher than the system average.

“This marks the first opportunity for significant growth at one of our most profitable hubs,” he added. “We are excited about adding this capacity, particularly into the diverse and robust North Texas economy, which is one of the fastest-growing regions in the US.”