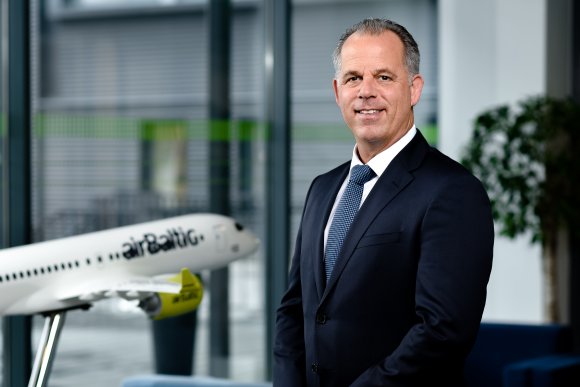 airBaltic was one of the fastest-growing carriers in Europe in 2018, with OAG data showing an 18 percent increase in capacity for the year to 5.6 million seats.

The carrier is targeting five million passengers this year and has incredible growth plans to hit 15 million by 2025. It’s a strategy which will see it open new bases in Western Europe and add a host of new airports to its route network, an amazing turnaround from a few years earlier when, in the words of CEO Martin Gauss, the carrier was in a “very bad position”.

The carrier undertook an extensive restructure which has led a huge revival in fortunes, and the heart of this revival is the not-inconsiderable task of transitioning from 737s and Bombardier Dash-8 turboprops to an all-Airbus A220 fleet; an aircraft which it committed to early and wholeheartedly as the launch customer.

In 2012 when beginning the long process which would lead to the successes being felt today, Gauss explained that airBaltic “did the math” and made a pivotal choice to reshape its fleet.

“The A319 and the 737 are heavier, while all aircraft have the same engine technology. So therefore just from a weight point of view, the A220 is the most efficient aircraft. On top of that it has a range which in unreached in the under 150-seater segment.”

“So therefore it’s a unique aircraft in its category, which is probably why Moxy, JetBlue and Delta have chosen it.”

Coupled with this bold decision, the airline has focused heavily on customer satisfaction, and has regularly been ranked as OAG’s most punctual global airline. It hit 90.1 percent on-time performance in 2017 and retained the top spot in Europe last year. Allied to this are a host of international awards, including the coveted Airline Market Leader of the Year title at the ATW Airline Industry Achievement Awards.

The next phase of growth

airBaltic now has 18 A220-300s already in service and a further 32 on order, and Gauss explained that its heartland in the Baltics remains an immediate priority for growth.

“Our business plan calls for up to 50 A220s to be based here - expanding from Riga which stays a hub and spoke airport - but also Tallinn and Vilnius; we’re adding aircraft to these two bases.”

However, with another additional 30 aircraft on option, Gauss revealed that another phase of growth might be further afield.

“If we exercise these options, we have identified other airports in Europe where we’re going to base the aircraft and fly the same concept, but it would not be in the Baltics,” he said. “It would be a point-to-point operation to other countries outside the Baltics.”

While the decision to use only A220s will give the airline significant efficiency gains, the seven-hour range means most Asian destinations will be impossible to reach, making Western Europe the logical choice.

“We are already pretty far in the East, so if we talk about a move it has to be west. As a European carrier you cannot base aircraft in Russia. The maximum we can reach in Asia is India’s west border and there is no airport there which would make sense for us to serve.”

airBaltic now serves more than 70 destinations direct, but its extensive network of codeshare partnerships – 21 at the time of writing – means it can access more than 300 with one stop.

This strategy gives airBaltic “a geographical advantage” which no single alliance could match, according to Gauss.

“The beauty of our codeshare network is that we have strong agreements through all alliances; there is no alliance which is not represented,” he said

“We are serving up to seven hours with our aircraft and we can reach strategic points. From these points our partners take people onwards. And that leads to a connectivity for the Baltics which is unreached, and nobody else can build this.”

This network also offers a key advantage in its hybrid strategy of ultra-low-cost and high-end business class, giving codeshare partner passengers in the front of cabin the experience they expect.

airBaltic added Abu Dhabi to its route network in 2017, a move which only became possible following the switch to A220s. Gauss explained that the aircraft technology makes a “makes it possible for a 150-seater to depart on a six-and-a-half-hour trip in 42 degree heat possible – that means something”.

And now its reach with partners is truly global.

“From Abu Dhabi with Etihad we can reach the east of Africa, India and South East Asia. From Madrid with Iberia we can reach South America. In Lisbon with TAP we do Brazil, in Amsterdam with KLM and Stockholm with our new partner SAS we can reach North America. In Moscow with Aeroflot we can do the whole of Russia.

“These partnerships work very well for us; if we now decided to join an alliance we would maybe have some benefits, but we would have to give up the codeshares.”