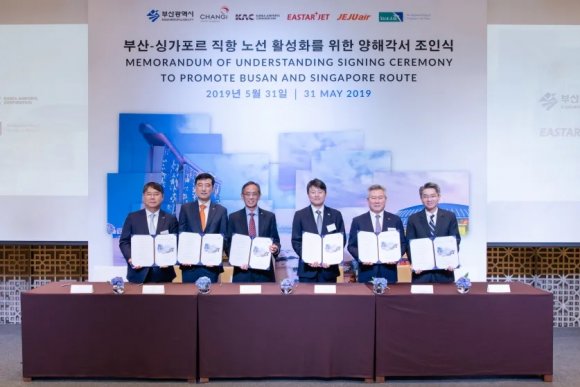 A six-party Memorandum of Understanding has been signed to promote trade, business and tourism flows between Singapore and Busan, which includes the launch of new routes.

The one-year partnership follows the allocation of traffic rights to South Korean low-cost airlines Eastar Jet and Jeju Air, as well as Singapore Airlines subsidiary SilkAir, to operate flights on the Singapore-Busan route.

SilkAir’s four-weekly service to Busan started on 1 May 2019 while Jeju Air will commence its service to Singapore on 4 July 2019. Eastar Jet is expected announce its schedule in the coming months.

Busan had been identified by OAG as the top unserved market for Changi Airport, with an estimated indirect two-way traffic exceeding 75,000 passenger movements annually.

“For many years, connectivity between Singapore and South Korea has been limited to Seoul with around 60 weekly services,” said Lim Ching Kiat, managing director, air hub development of Changi Airport Group.

“As Changi Airport is the gateway to Southeast Asia and given the increasing travel demand over the years between Singapore and Busan, we are pleased to welcome the opening of this new route which will offer greater convenience for travellers between the two cities.”

The six-party collaboration aims to strengthen air connectivity between Singapore and Busan and raise awareness of the respective airlines’ product offerings.

Son Changwan, president and chief executive of Korea Airports Corporation (KAC), added: “The Busan- Singapore route will promote tourism in both cities and help improve travel convenience for residents in Busan and Singapore.

“KAC will continue to make every effort to stabilise Busan-Singapore route and to meet the requirements of the government and local community by launching new airway connections.”

South Korea ranks 13th among Changi Airport’s top passenger markets. In 2018, 1.46 million passenger movements were registered between Changi and Seoul Incheon. From 2013 to 2018, the five-year compounded annual growth rate for passenger traffic on this route was 5.4 percent.