Georgian airlines are to be temporarily suspend from flying to Russia amid rising tensions between the two countries. Carriers from Georgia have been banned from using Russian airspace.

The move comes after the Kremlin also barred Russian airlines flying to Georgia, saying it was to “ensure Russia's national security and protect Russian nationals from criminal and other unlawful activities”. The suspensions will start from 8 July 2019.

For w/c 24 June 2019, a total of 25.6 percent of seats are to points in Russia. Turkey is second with a 12.0 percent capacity share, followed by Ukraine on 8.6 percent. Israel is fourth on 7.7 percent and United Arab Emirates completes the top five on 6.3 percent.

Georgia, meanwhile, is only the 16th largest international market from Russia for the same week with a 2.1 percent capacity share of departure seats. It trails the likes of Belarus (2.2 percent), Armenia (2.4 percent) and Kazakhstan (2.6 percent).

Capacity between Russia and Georgia has growth rapidly in recent years, topping 1.77 million seats in 2018. This is up by 561 percent compared with five years earlier.

In total, there are 17 non-stop routes served between Russia and Georgia. Ural Airlines operates on ten of them, while Georgian Airways operates six routes.

Tbilisi - Vnukovo is the second-largest with 5,292 weekly seats, while Tbilisi - Moscow Sheremetyevo is third with 4,502 seats. 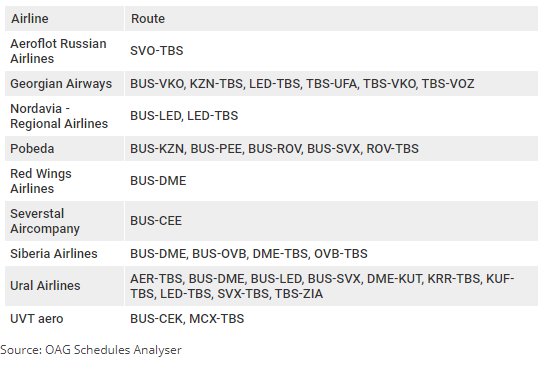