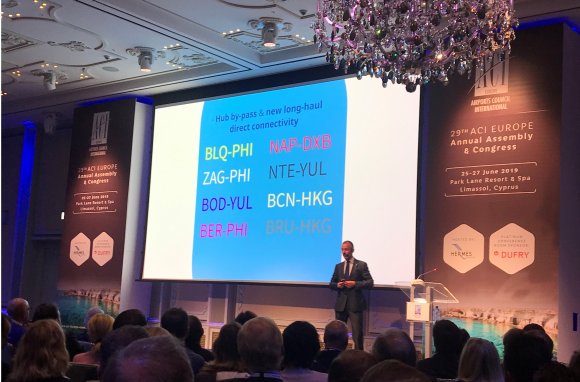 Addressing the ACI Europe General Assembly, Olivier Jankovec said that greater cooperation between the industries was a key strategic priority, but warned that “for most of us this page is yet to be written”.

According to Jankovec, changing business models mean that “traffic growth no longer comes with the same sort of revenue profile we used to have”, necessitating a clearer link between network and revenue growth.

“Since 2013 non-aeronautical revenue is falling in all categories except food and beverage and parking,” said Jankovec. “Technology is having a major impact but a lot of the change is coming from frequent flyers; if you’re a frequent flyer there are only so many bottles of perfume you’re going to buy.”

Proactive network development is therefore a major priority for airports, Jankovec said, and it should extend far beyond relationships with tourism authorities, engaging a far wider group of stakeholders.

Jankovec noted that currently 71 percent of European airports of fewer than one million passengers per year are loss-making, with greater challenges on the horizon.

“New and unprecedented disruptive forces that raise questions about the future of air connectivity. And for now we don’t have the answers.”

With the non-aeronautical revenue challenges, the majority of airport profitability improvement is currently generated by cost-reduction.

“Moving forward we are a bit worried on the cost reduction side,” Jankovec added. “There is only so far you can press the lemon.”

Further exacerbating this is the airport capacity crunch, which leads to more airport competition, and less airline competition.

“Beyond 2019 we see strong demand and connectivity fundamentals. But there is a rise on airport competition driven by airline hybridisation, consolidation, ambitious non-European airlines and new aircraft technology,” said Jankovec.

In addition, a focus on passenger experience is a critical factor. “For every 1 percent increase in passenger satisfaction there is a 1.5 percent in commercial revenues,” added Jankovec.