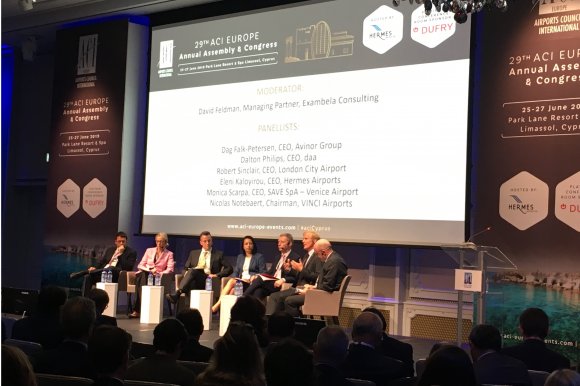 A panel of airports leaders from across the continent, gathered at the ACI Europe Annual Assembly, have outlined how the industry needs to work and communicate more collaboratively to change public perceptions.

In an environment where “flying shame” is materially impacting on customers’ desire to travel by air, aviation is being unfairly targeted, said Eleni Kaloyirou, chief executive of Hermes Airports.

“I don’t understand why aviation has been singled out,” she said. “Aviation contributes 2 percent of global emissions, but road traffic contributes 17 percent. Concrete production creates 4 percent.

“We are not the bad guy we are made out to be; the benefits to the economy are indisputable. We’re doing this and being sustainable. Can we do more, yes, but we bring a lot of value to the communities we serve.”

Fellow panellist Dag Falk-Petersen, CEO of the Avinor Group, agreed that “we are under-communicating the good things about aviation”.

“Designing the new train system in Norway won’t be carbon neutral for 50 to 70 years because of the concrete production and construction work, but everybody thinks it’s green.”

Falk-Petersen warned that “we should not be greenwashing” but rather being open and honest, a view echoed by Dalton Phillips, CEO of daa.

“We have to be honest and transparent,” said Phillips. “There is loads going on in terms of sustainability, but we don’t talk about it.

“There is a gap in communication. Look at the food sector; far more polluting than we are, but they work together and control the narrative.

“If you tax the guts out of our industry on sustainability it’s so short term. We’re better off creating economic value and taxing commerce.”

Phillips also said that cooperating with airlines and manufacturers is critical. “We need to get everybody in the room and lock the door, and tell them to sort it out,” he said.

“We need to recognise that we can’t just say ‘we’re not the bad guys’ – the issue of decarbonisation is much more difficult in aviation,” said Sinclair. “All we do is talk about growth, but we need to change the language they use. We need to start the conversation on what we’re doing for the planet and communities.

“I think we’ve got a problem. Let’s be honest; we’re 5 percent of the aviation emissions – 95 percent comes from the airlines. We need to support that, and if we don’t, we’re toast.”

This sentiment shared by Nicolas Notebaert, chairman, VINCI Aiports, who said it is critical to tackle the “really dangerous” changes across Europe.

“We need to unite more with airlines. When there is such a danger and we are attacked as an industry, we need to unite,” he said.

However, Notebaert brought a global perspective and noted that “as Europeans we need to realise the world is not waiting for us”.

“For many areas of the planet aviation is essential,” he said. “Countries around the world are not going to stop air travel because it’s essential to them.”