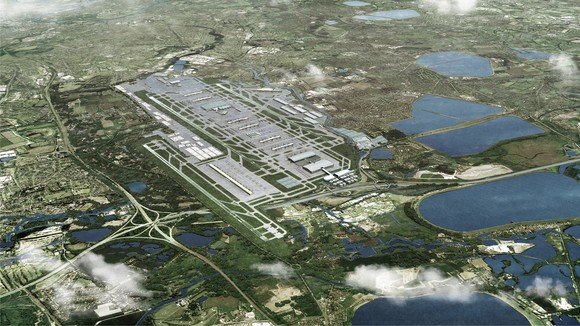 The British government may well have granted permission for the project, but it is still heavily opposed by many in London.

A legal challenge to the runway with the backing of the Mayor of London and five of the capital’s boroughs started in June.

Indeed, arguments over the runway have been going on for so long and have become so fierce that it is the UK’s aviation equivalent of Brexit, creating no end of division and anger.

But Virgin Atlantic CEO Shai Weiss, who took up the role on January 1, is not only confident the runway will be in operation by 2026 – the current projected completion date – but will give the airline the chance to grow in the UK.

He says: “In the long run, we have a clear desire to become the UK’s second flag carrier. We want to ensure the third runway at Heathrow is used to establish a second flag carrier to the benefit of consumers and business in Britain.

“We can only become the second flag carrier in this country if we are able to get a very high number of slots allocated at Heathrow once the third runway comes into operation. The current regime, though, doesn’t allow for that.

“You will hear us talking forcefully and with great passion about why the current regime of slot allocation prevents the emergence of Virgin Atlantic as a second flag carrier, which we believe is essential for consumers and passengers and businesses.”

Speaking four months after taking up the CEO role, Weiss argues that other countries, including the US, Korea and Japan, are all sustaining two flag carriers, and adds that the UK has the market to do so, providing Virgin is allowed to scale up accordingly.

He adds: “We believe in order to really succeed and provide more competition across more routes to more destinations, scale is necessary. And there is a once-in-a-lifetime opportunity to achieve that scale given the emergence of the third runway when it gets built.

“But it is clear the current system is not allowing for that, so we will be arguing, and we believe the government will support us – and so will anyone with an eye for UK plc. Passengers in this country would see the emergence of stronger competition. If not, it’s just BA. And we don’t think that’s good.

“We’ll take it to the public, the civil servants and politicians, and our argument is very compelling.”

While Weiss admits that the situation remains fluid over the future of the third runway, he argues it is better to get on now with positive planning rather than waiting until plans have been set in stone.

He says: “We’re working to the [Heathrow] timeline. Even if there are delays in the actual build, the decisions underpinning that will be taken over the next year or two.

“We don’t have the luxury of delaying our thought process and formulating our vision. It’s a beautiful situation where you can take a long-term horizon and we see a once-in-a-lifetime opportunity to emerge as a second flag carrier and become the most loved travel company.

“Those two will be with us well into the future. Planning and the decisions are now; build is another matter.”

Weiss adds Heathrow is just one of Virgin’s three long-haul bases, with the others located at Manchester Airport and London Gatwick Airport. Although Heathrow will have a new route to Mumbai with a daily service relaunch in October following the demise of its Indian partner Jet Airways, and a new flight to Sao Paulo has been confirmed for 2020, the focus on the other two airports is to optimise their operations, albeit with potential expansion.

But he adds: “We’ve done a very good job of growing into the US with our partner Delta. It’s now time to expand into other regions but if you look at them, they have to fit the Virgin Atlantic way of doing things, which is strong in partnership, where there is a nice blend of business and leisure passengers and where it’s bi-directional, not just one-directional.

“As many as 30 percent of our tickets are now sold in America, which is around double where it was before the joint venture. In a time of uncertainty with Brexit, it’s really an asset for us.”

He believes this process will be further assisted by Virgin’s decision to acquire Flybe as part of a consortium including the Stobart Group, which owns London Southend Airport, and hedge fund Cyrus Capital Partners for £2.2 million in March.

The new airline will be called Connect Airways, and while Virgin and Stobart will each have a 30 percent stake compared with Cyrus’s 40 percent, Virgin will be the lead partner.

Weiss says the acquisition will help shore up operations in all three of its long-haul bases, adding: “Flybe has a terrific network from Manchester. Heathrow – we just expand it and Gatwick remains a very important place and a strong operation with further opportunities there.”

He also believes it provides a new opportunity for growth, adding: “It’s an essential component of building our base and returning to sustainable profit.”

Nor was the Flybe acquisition a spur-of-the-moment decision driven by the regional airline’s extreme financial difficulties.

Weiss says: “Sometimes, a transaction is opportunistic and it just happens; this one started way back. The exact timing was coincidental, but it was nice to start with such a message to our people and to the people of Flybe that we’ve kept them flying, saved 2,400 jobs and the pensions.

“For us, it’s very exciting. It’s strengthened us at Heathrow and Manchester in terms of connectivity.

This company will be rebranded and allow us to reach deeper into Europe and the UK and Ireland.”

Weiss adds that the acquisition will also make Virgin Atlantic a more balanced airline with local feeds as opposed to a point-to-point carrier.

The acquisition comes as the airline launches some select new routes – a Heathrow-Sao Paulo flight launches in 2020.

He also argues that lessons have been learnt from Virgin’s Little Red airline venture, which lasted from 2012 to 2015.

The airline was set up to compete with British Airways on UK domestic flights to Aberdeen, Edinburgh and Manchester from Heathrow, using four wet-leased Airbus A320s.

From Little Red to Flybe

However, LCC competition proved to be cheaper than expected and the airline was eventually closed owing to poor passenger numbers, a problem Weiss believes will not be an issue with the new set-up.

He says: “Launching Little Red, operating Little Red and then ultimately shutting it down does not mean the idea is not right. That’s what I tell our people.

“People ask what the difference will be between Little Red and Flybe. My cheeky answer is 8.5 million passengers. Flybe is a proven network.

“It’s clearly had a tough few years but we think we can help Flybe be more successful under the Virgin banner with a feed and all the other things we bring together with our partners Stobart and Cyrus Capital. So the comparison with Little Red was absolutely the right one. The question is, what is different here?

“Like I said, 8.5 million passengers, load factors of 80 percent and above, a much deeper network, the fact it has slots at Heathrow.

“We flew Little Red mostly from Manchester into Heathrow. We now have a base in Manchester. And we have a partnership with Delta Air Lines which is flourishing and about to expand with Air France and KLM. We’ve spun out our loyalty programme to be part of the Virgin Group.

“If you look at all the things we have, our job over the last two to three years was to remove all barriers between preference and purchase, which we now believe we have done. We have a wide network with our partners, we will have a domestic feed, Flybe, we have a loyalty programme with earn and burn across our partners, and across Flybe in the future.

“We have made sure there should be no major barriers from preference into purchase, and sustainable, profitable growth.”

He adds that this growth with Flybe will take the form of expansion in Heathrow and Gatwick, which is the main start point for customers who have booked a trip with the airline’s tour operation, Virgin Holidays.

He says: “We are committed to these three bases with the connectivity Flybe provides us, although not so much at Gatwick.”

Weiss says the airline will also benefit from the delivery of 12 Airbus A350-100s, with the first delivery expected in later summer this year and the last set to arrive in 2021. The first of the new aircraft will operate the Heathrow-New York JFK route and all three cabins have undergone a makeover to further drive customer service.

It is also 30 percent more fuel and carbon efficient than any previous aircraft in the Virgin fleet, although Weiss admits that this was not the only reason why the A350 was chosen.

He says: “It is 50 percent less noisy and that was important. If you look at the environmental footprint of an airline, 90 percent of it is in the fuel, but we know we have a responsibility also to the communities around airports across the world.”

And if Weiss is correct, then one of those A350s could be taking off from the third runway at Heathrow by 2026, just as the UK starts to make some sense of what Brexit really means and how to enact it across the country.