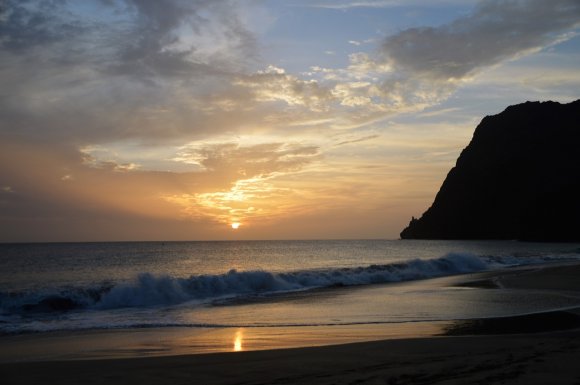 Mention Cabo Verde and Loftleidir Icelandic to anyone outside the airline world, and more than a few in it, and you’ll likely get a blank stare. Cape Verde and Icelandair might be more familiar, but few outside aviation know the connection. It’s a link that has existed formally since March, when Icelandair Group’s subsidiary Loftleidir bought a majority share in Cabo Verde Airlines.

Loftleidir’s involvement with Cabo Verde Airlines is not new; it has worked since 2017 to help the carrier avoid administration and leases its entire fleet of two aircraft. In its current form, it’s a niche operation in a niche destination.

For the unfamiliar, Cape Verde is an Atlantic archipelago of ten islands about 390 miles west of Dakar and six hours from the UK, with a population of slightly more than 500,000. Settled by the Portuguese, it gained independence in 1975 and came onto the radar as a mainstream tourist destination a decade ago.

Buoyed by the increasing number of visitors and mindful of its geographical position, it now has big ambitions for its airline. Loftleidir paid just €1.3m for its 51 percent stake in Cabo Verde Airlines, but the deal came with a promise of another €6m in funds from the Icelanders.

Loftleidir was set up in 2002, firstly as a wet-lease ACMI and charter business, but has expanded to offer dry lease arrangements with carriers as diverse as Air Niugini in Papua New Guinea and Venezuela’s Santa Barbara Airlines. It is now in the driving seat at Cabo Verde Airlines, which the Cape Verde government has turned over to private enterprise. The process is speeding along, with another 39 percent being offered to outside investors later in 2019 and the remaining 10 percent being sold to staff.

In its former guise, Cabo Verde Airlines was based at Nelson Mandela International Airport, serving the islands’ capital, Praia, on the largest island, Santiago. However, it is elsewhere that Loftleidir believes it can replicate the success of Iceland’s Keflavik Airport in attracting transatlantic transfer passengers, tourists and stopover visitors.

Instead, the new carrier operates from the island of Sal, the main tourist destination, which receives almost half of all the archipelago’s arrivals. Furthermore, Loftleidir executive vicepresident Erlendur Svavarsson believes Sal’s Amilcar Cabral International Airport has the best infrastructure. Sal also boasts the most hotels likely to attract stopover traffic, unlike Praia, where capacity is in the commercial quarter mostly serving business travellers.

Svavarsson says: “Praia has 3,000 hotel rooms, but Sal has 14,000 and the airport infrastructure is superior.” He adds while the deal might only have been struck in March, the relationship between the two companies goes back much further. Svavarsson says: “We signed an agreement to manage the company in August 2017 and to prepare it for privatisation.”

The 51 percent stake in the airline is held by Loftleidir Cabo Verde, which itself is 35 percent owned by Loftleidir, with the remainder from unnamed investors. The deal provides Loftleidir with a ready market for its aircraft leasing business, with the new carrier being built around the Boeing 757, two of which are currently registered in Cape Verde.

These will all be 757s and Svavarsson points out that their range of around 7.5 hours gives the airline so many options. It is hoped the aircraft will allow Sal to act as a stopover point between Europe, Africa and South America, using the Icelandair model. The islands are neatly situated about four hours from both Lisbon and the Brazilian coast, making them a contender for traffic to South America, some of which is currently picked up by carriers such as Portugal’s TAP and Madrid’s Air Europa. In addition, most European capitals are within six hours.

“We like narrow bodies for thin long-haul routes. We want to start up a hub connecting four continents,” Svavarsson continues. “Longer term, we plan to open Toronto, Washington, Lagos. In the coming months, we will mostly be increasing frequencies rather than adding new destinations. The UK is something we are looking at, maybe Gatwick, but there are no firm plans.

“We estimate half will be transfer traffic, with tourism 30-40 percent and the remainder from the diaspora (VFR traffic). We foresee that the mix will not be dissimilar to what we have in Iceland.”

Cabo Verde Airlines’ routes network already takes in the majority of destinations where the island’s inhabitants have now set up home. Apart from Portugal, the largest communities are in Brazil and the New England coastal area. The Netherlands has a significant number, but there are currently no Cabo Verde Airlines’ flights to the country.

Svavarsson will not be drawn on what he looks for in an airport when launching new destinations, but says: “It’s more appropriate to say what we look for when selecting routes; we research traffic flows and see which are not served by direct flights.”

However, he adds that one criterion for starting new routes has to be the ease of doing business, with mainland Africa sometimes notorious for posing obstacles.

“Sal and Cape Verde are very well developed,” Svavarsson says. “We have no issues with currency or exporting money. But it is a challenge in other countries. We will not enter any routes without sorting these issues beforehand.”

Loftleidir’s expansion plans do not include inter-island routes, as another transformation has been the handing of domestic services to Binter Cabo Verde, a subsidiary of the Canary Islands-based regional airline. Binter CV uses three ATR 72-500s to link all seven of the islands’ functioning airports - the island of Brava closed its Esperadinha Airport after only 12 years in 2004 due to persistent high winds; while Sao Antao’s Agostinho Neto Airport shut following a fatal accident in 1999.

“The government had already sold domestic operations to Binter before we got involved,” says Svavarsson. His problem is that Binter’s operation is based at Praia, so there are some negotiations to do to ensure connectivity. “We want passengers to be able to connect from Sal to all the different islands,” he adds.

Sal is already very successful in attracting tourists and the islands as a group have considerable potential. Tourism consultancy Horwath HTL estimates Cape Verde derives 45 percent of its GDP from tourism and that there are 18,382 hotel beds on the islands, with 70 percent being on Sal and Boa Vista, but potential in Cape Verde is under-developed.

Official 2017 figures show 716,775 tourist arrivals, compared with a combined 15.76 million in Tenerife, Gran Canaria, Lanzarote and Fuerteventura last year. Sal received nearly half of all arrivals at 343,000, with Boa Vista around a third on 207,000 and Santiago only 78,000. The UK heads the arrivals list, with nearly 24 percent, followed by Germany at 11 percent and France and Holland, both at 9.7 percent. Portuguese visitors account for 9.5 percent of the total.

Loftleidir is looking north for inspiration. “Part of our strategy is to stimulate tourism. We are inspired by what we have seen in Iceland in the past ten years.”

He has good reason to be; ten years ago, Iceland saw fewer than 500,000 tourists, but before Wow Air’s demise, this figure had hit 2.4 million. Cape Verde’s ambitions are similar, with a target of 3 million by 2030. The new carrier can also look east to mainland Africa for its passengers, where there is undoubtedly room for expansion; Africa has 13 percent of the world’s population, but only 3 percent of the world’s airline passengers – a number that will expand as prosperity increases.

However, Cape Verde and its airline already have potential competitors as a stopover destination from Africa. Ethiopian Airlines is building a western African hub at Lomé-Tokoin Airport in Togo, using its investment in Togo’s ASKY Airlines, and also has its eyes on Guinea, where it is helping to start Guinea Airlines.

Ethiopian plans to use Lomé or Lagos as a refuelling stopover for its Houston flights, scheduled to start in December. Its Addis Ababa-Newark flights already operate via Lomé or Abidjan. However, Svavarsson points out that a stopover airport is not the same as a transfer hub.

“Anyone serving the same destination must be a competitor, but we believe that the hub strategy serving more destinations rather than point-to-point is more efficient.”

Whether it targets stopover traffic, tourists or the diaspora, Cape Verde’s geographical position combined with Loftleidir’s ambition clearly has considerable potential. Time will tell whether the islands become known, in aviation terms at least, as the Iceland of the south.