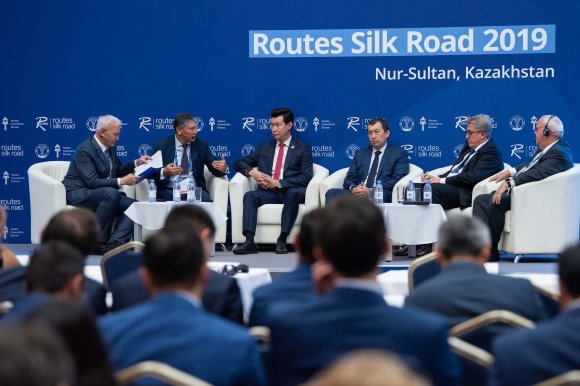 Kazakhstan needs to promote itself better as a tourist destination if it is to see serious growth in passenger numbers, delegates at Routes Silk Road 2019 have been told.

Speaking in a panel discussion on doing business on the Silk Road in Nur-Sultan, Kazakhstan, Kazakh Tourism deputy chairman Kairat Sadvakasov said currently just 20 percent of arriving flyers are from countries outside the region and where many key markets are.

He added it is now up to the tourist board to spread the message about Kazakhstan’s charms further afield with the aim of achieving a level of up to 40 percent of travellers from longer-haul markets in five years time.

Sadvakasov said: “We are an emerging destination and we are not perceived as a trusted destination yet.”

He also urged local ground handlers and tour operators to start considering 24 and 48 hour itineraries in order to allow transiting passengers to make a slightly longer stopover and see some of Nur-Sultan as airlines increasingly focus on its hub potential.

While he said the tourism board will continue to focus on the key markets of Russia and China, he said it would also branch out to European and South East Asia and in particular to countries with visa-free regulations.

Somon Air CEO Thomas Hallam agreed that cutting back on visa requirements is a key requirement for any country serious about growing its tourism numbers.

He added the markets are there too, citing the example of Korea where 50 percent of the population consider themselves keen travellers. Furthermore, he added many of them have ticked off the more well-established destinations like Europe and are keen for new and different experiences, a gap in the market that Kazakhstan is well placed to fill.

Qazaq Air CEO Plamen Atanassov agreed there is plenty of opportunity for attracting more overseas travellers, saying just 40 percent of those landing in Nur-Sultan are from overseas while this number drops to 30 percent in Almaty.

And he agreed this work must fall to Kazakh Tourism, adding: “There are not so many people who are aware of the Kazakhstan’s resorts and we need to think about what is needed to attract the tourists.”

He also added with the growth of the country’s regional flying programme, many Chinese and Russian travellers are beginning to use Nur-Sultan as a regional base from which they can then visit parts of the country and even make quick visits to Russia.