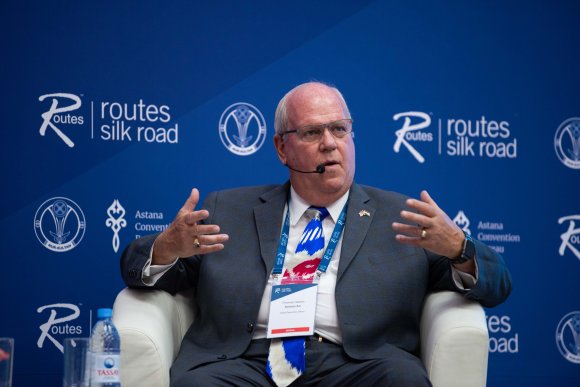 The CEO of Somon Air, the first private airline in Tajikistan and currently the country’s only carrier operating scheduled service, has set out on a mission to connect the capitals of Central Asia.

Captain Thomas Hallam told Routes Silk Road 2019 that Somon was aiming to forge strong partnerships inside and outside the region.

The airline would also aim to add widebody aircraft to its fleet before the end of the year to compete on Russian routes, and will “wait and see” on the 737 MAX order previously reported as cancelled.

Read more: Get to know the Stans: Tajikistan

According to Hallam, the negative perceptions surrounding the MAX jets create a problem, even though it remains an “important aircraft” for the fleet because of its economic performance.

“The issue from our side is that if we’re the only operator in the country, and the aircraft has a very negative perception in this part of the world, then we have a problem,” he told the conference.

“Even if the plane gets certified I still have to convince the ministries and the press that it is indeed safe.”

Overall, Hallam’s vision is to connect Central Asia and recently called the first meeting of all CEOs of operating carriers in the region.

“My goal is to greatly increase connectivity, and it’s about beginning the process of working together. The more we’re working and talking together, the more we can understand where we complement each other.”

Hallam also recognised significant challenges in achieving these goals. "Part of it is borders, part of it is airports," he explained.

Outside of the region, Somon is speaking to a wide range of carriers in the hope of forging relationships which will positively impact connectivity to, from and within the region.

“We’ve had conversations with American Airlines and Scat,” said Hallam. “It’s a matter of time”

The carrier also holds ambitions to grow more inbound traffic, said the CEO. Despite Tajikistan mainly attracting a “more adventurous” traveller, he is confident on changing the network dynamics.

“Most of our traffic is outbound, but we’re working with new destinations to try to encourage more inbound tourism,” he said.

Overall, the current outbound-dependent market is leading to limitations on the carrier’s potential, which Hallam is keen to address,

“We’re moving away from the migrant traffic; it’s too seasonal and it would mean we become unprofitable,” he said. “We need to move away from point-to-point traffic.”

Although operating far from the traditional tourist trail, facing an imbalanced network and growing from a standing start, Hallam remains upbeat about the airline’s prospects.

“We have high ambitions,” he said. “And we’re determined to keep pushing until we get there.”