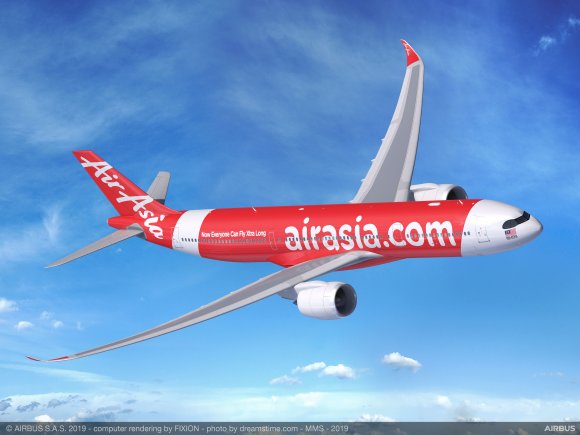 AirAsia X, the long-haul unit of the AirAsia Group, has finalised a firm order for an additional 12 Airbus A330-900 and 30 A321XLR aircraft.

The deal increases the number of A330neo aircraft ordered by the airline to 78. Meanwhile, the A321XLR order sees the wider AirAsia Group strengthen its position as the world’s largest airline customer for the A320 Family, having now ordered a total of 622 aircraft.

Tan Sri Rafidah Aziz, chairman of AirAsia X, said the contract is “testament to our confidence and commitment to longer haul air travel”.

“This is the future of our long-haul operations. The A330neo’s revolutionary new features and modifications will move our long-haul service sectors up to a higher level and allow AirAsia X to look at expanding beyond the eight-hour flight radius, such as to Europe, for example.”

Candela is currently CEO of Iberia Express and has been in this role for six years. He will take up his new role on 9 September.

Luis Gallego, chairman of Iberia and LEVEL, said: “I would like to thank Vincent for the good job he has done in leading Level to this point and welcome Fernando into his new role.

“Fernando has a fantastic track record at developing low cost brands allied with strong leadership skills. I am confident he will continue to develop the Level operations and brand.”

Virgin Atlantic and GOL have signed a new codeshare agreement which will allow customers to connect from the UK carrier’s new London Heathrow – Sao Paulo service onto flights across Brazil.

GOL is the largest domestic carrier in Brazil and will offer connections to 37 destinations across the country, including Brasilia, Rio de Janeiro and Recife.

The two airlines plan to expand their codeshare further in the near future with the addition of flights to Argentina, Chile and Uruguay, in addition to a reciprocal frequent flyer programme expected soon.

Virgin Atlantic will fly daily from London Heathrow to Sao Paulo with the inaugural flight on 29 March 2020 on board Boeing 787-9.

Cathay Pacific chairman John Slosar is to step down from the role in November.

He has been with Cathay’s parent Swire Group for 39 years, including stints as the airline’s chief operating officer and CEO.

He will be replaced as chairman by Patrick Healy, another veteran Swire executive.

A statement from Cathay said Slosar’s departure was “due to his retirement and that he is not aware of any disagreement” with the board.

Korean Air currently has codeshare arrangements with 35 airlines, including SkyTeam members such as Delta Air Lines and Air France, on a total of 950 routes.

China Airlines has ordered six Boeing 777 Freighters. The carrier, which currently operates one of the world's largest 747 Freighter fleets, plans to transition to the largest and longest range twin-engine freighters in the industry as it launches operations from Taipei to North America.

Valued at $2.1bn according to list prices, China Airlines had previously announced its intent to order up to six 777 Freighters at the Paris Air Show in June. Three of the six orders were confirmed in July.

The 777 Freighter can fly long-range transpacific routes in excess of 6,000 nautical miles with 20 percent more payload than other large freighters like the 747-400F.