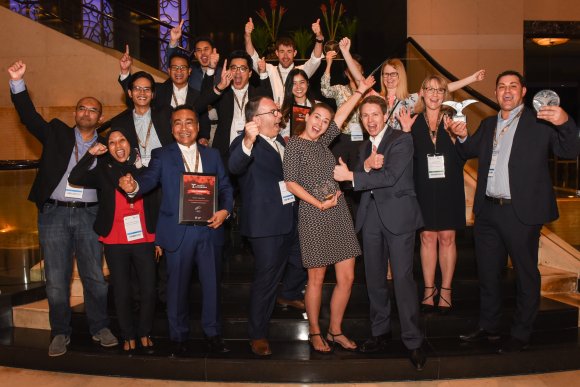 This week we profile three categories: Over 50 Million Passengers, Destination and Airline.

Although Amsterdam Airport Schiphol reached slot capacity in 2018, the airport handled 71.1 million passengers during the year, a rise of 3.9 percent on the previous 12 months. Sixteen new routes and ten new destinations were added to its network, including Bangalore, Las Vegas and Beirut. Much of the Amsterdam’s team work has focused on approaching airlines to look at ways of optimising their network; deploying more sustainable aircraft; better utilising belly cargo to boost financial performance; and enhancing passenger experience. Marketing activity this year has also included the Dutch Sky Masters, an event to honour the airport’s airline partners that featured an impressive show of dancing and freerunners.

Dubai International (DXB) welcomed 41.3 million passengers in the first half of 2019, with India remaining the top destination country by passenger numbers. Although the figure was a 5.6 percent drop year-on-year, the reduction was because of closure of one of DXB’s two runways in April and May. The closure of the southern runway for refurbishment halved the hub’s runway capacity leading to a reduction of 32 percent in passenger flights over a 45-day period. Despite this, new routes started this year have included GoAir's inaugural flight from Kannur; Air India’s services to Indore and Kolkata; and Vistara’s flights from Mumbai.

As Hong Kong International Airport (HKIA) celebrated its 20th anniversary, the airport welcomed 75.1 million passengers and handled 428,870 flight movements in 2018/19, registering year-on-year increases of 2 percent and 1.3 percent respectively. Total cargo volume reached 5.06 million tonnes, securing HKIA’s status as the world’s busiest cargo airport for the ninth consecutive year. Following the opening of the Hong Kong–Zhuhai–Macau Bridge and the Guangzhou-Shenzhen-Hong Kong express rail link, the airport has worked with airlines to capture new business opportunities through expanding its catchment. To cope with the increasing air traffic growth in the long term, HKIA is in the progress of building a three-runway system for operation by 2024.

Istanbul Airport became fully operational in April 2019 after taking over air traffic from the former Atatürk Airport. The city’s new aviation hub comprises three runways and three taxiways, with a 90 million passenger per annum capacity, rising to a staggering 200 million passengers per year once the facility is fully operational. Construction will be completed in four phases, with future work to include two additional runways and a second terminal building. Since the transition to full capacity, eight foreign airlines have taken off from Istanbul Airport for the first time, including Ethiopian Airlines, China Southern, Air Albania and IndiGo.

Singapore Changi’s total passenger traffic hit 65.6 million in 2018, a year-on-year rise of 5.5 percent and up from 37.2 million a decade earlier. In the last 12 months, the airport has added seven new passenger airlines, as well as expanding connectivity to the likes of Urumqi, Nanning and Wuhan in China, plus Busan in South Korea and Kolkata in India among others. Earlier this month, Singapore Airlines also began flights to Seattle. Singapore Changi undertakes a number of marketing activities to help drive inbound, outbound and transfer traffic. They have included campaigns to promote Singapore in secondary cities and working with United Airlines and Singapore Tourism Board to organise a series of travel and trade roadshows in the US and Malaysia.

Canary Islands, made up of seven islands in the Atlantic Ocean off the Moroccan coast, has eight airports connecting the Spanish archipelago to 148 destinations around the world. The economy is based on a booming tourist trade, representing almost 40 percent of GDP and employment. Promotur’s strategy is built around four lines of action: lobbying the Spanish government and airport operator AENA; collaboration with airlines and tour operators; a €10m flight development fund; and promoting Canary Islands tax benefits. The development fund has so far led to the launch of 24 new routes, including year-round flights between Tenerife Sur and Nice, and Fuerteventura and Lyon.

Georgia National Tourism Administration was named Overall Winner at Routes Silk Road 2019, with judges recognising its commitment to a robust route development strategy that has been a significant area of focus for the team over the last three years. Thanks to its efforts in helping to grow the country’s aviation market, the number of international tourists to Georgia topped 8.6 million in 2018, helping to generate revenues of $3.2bn from tourism. The organisation has worked closely with airports to organise road shows and press trips, as well as utilising ad placements in on-board magazines.

One of the core activities of the Moroccan National Tourist Office (MNTO) is to develop direct air connections. Its efforts contributed to an 8 percent rise in the number of visitors to Morocco in 2018 and average growth of 4 percent over the past five years. A total of 14.6 million seats are expected in 2019, up from 11.7 million a year ago. This is being fuelled by the launch of a massive 206 new routes, 132 during the summer season and 74 in winter. In summer 2020, American Airlines is making its first entrance into Africa with a three-weekly service between Philadelphia and Casablanca.

2018 was the best-ever year for tourism to the island of Ireland in terms of visitor numbers, with growth of 5 percent compared with the previous record year. There were 11.2 million overnight visitors, representing growth of 40 percent from 2011. Tourism Ireland works closely with all airports, which involves collaboration across two different political jurisdictions. In 2018, the organisation worked on 69 marketing campaigns with 22 carriers, ten airport partners and made a combined investment of more than €7m promoting travel to the island of Ireland. This is estimated to have generated €70m of economic benefits.

Over the past 12 months, American Airlines has launched or announced 12 new non-stop destinations to further increase its global footprint. Including the two prior years, this brings the airline up to 34 new non-stop destinations across five continents. Latest additions include the carrier’s first ever flight to Africa, its return to the Middle East, and the first direct service from North America to Dubrovnik in Croatia. In addition, it has added destinations like Budapest, Krakow, Prague and Cordoba to its network. Beyond adding service to brand new destinations, American also continues to expand in existing markets, leveraging the strength of its US hubs.

Oneworld member Cathay Pacific is in the last year of a three-year transformation programme that has already resulted in a financial turnaround. Despite the recent political turbulence in Hong Kong, the carrier is continuing to pursue further long-haul expansion. The airline introduced a four-times-weekly service to Seattle in March, using Airbus A350-900 aircraft, which became daily in July. Other new routes in recent years include services to Brussels and Cape Town. The next stage of Cathay Pacific’s evolution will be led by Augustus Tang, who took over as chief executive in August, and Patrick Healy, who replaced John Slosar as chairman this month.

KLM Royal Dutch Airlines celebrates its 100th anniversary on 7 October 2019, making it the world's oldest airline still operating. The SkyTeam member is one of the industry's pioneers of the hub and spoke model with a fleet of 117 aircraft in service. New destinations launched or announced so far this year include Las Vegas, its 18th point in North America, and Bengaluru in India, which will replace Jet Airways’ service. In May, KLM also extended the number of codesharing destinations offered in partnership with China Eastern from 14 to 63, including Yinchuan, Xining, Shantao, Zhangjiang and Zuhai.

As a part of Lufthansa Group’s multi-hub system, the carrier offers passengers extensive connections via Frankfurt, Munich, Zurich and Vienna. For the summer flight schedule the group operated a network that comprised 209 destinations in 74 countries. In 2019, Lufthansa has introduced flights to Eilat, Agadir, Triest and Thessaloniki from Frankfurt, as well as Bangkok, Edinburgh and Tromsø from Munich. It has also unveiled a tranche of new services to North America, as well as flights to Bengaluru from March 2020. Earlier this year, Lufthansa ordered 20 Boeing 787-9s and 20 Airbus A350-900s as it seeks to make its fleet even more fuel efficient.

Founded 14 years ago, Vueling has enjoyed ten years of consecutive growth and now operates about 350 routes. The airlines says it follows eight steps that have helped it to achieve 97 percent route development success rate, weighing up each new route by its estimated profitability, strategic importance and attractiveness for passengers. This includes developing a five-year business case, cooperating with airports and tourism organisations, and listening to feedback from key stakeholders in order to adjust schedules and the product. The airline took delivery of its first Airbus A320neo aircraft in 2018 and this year has launched a number of new routes from Bilbao, Tenerife North and Florence.