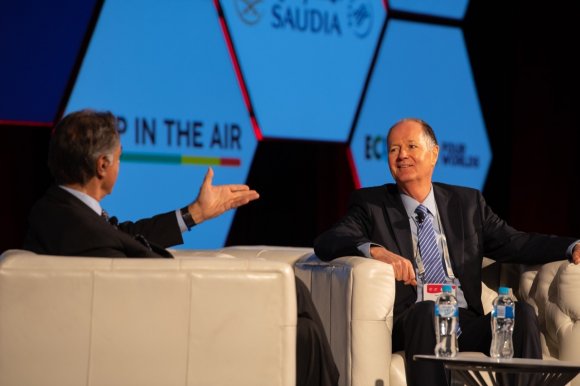 Saudia CEO Jaan Albrecht, a keynote speaker at World Routes on Sunday, said that it was previously an airline that didn’t promote itself, but that has all changed.

“It’s a different story now,” he said, both at the airline and in Saudi Arabia, with cities like Jeddah opening up and becoming “fascinating, vibrant” places.

A new government policy that starts at the end of September will also allow visitors from 49 countries to apply for electronic visas that will be much easier and cheaper to obtain—permitting passenger growth.

As part of this growth, peak traffic will grow from its current rate of around eight arrivals and departures per hour to about 35.

Saudia has ordered up to 100 Airbus A320 family aircraft, including 15 A321XLRs, an aircraft that Albrecht said would provide the capability to fly nonstop between Jeddah and Ireland or just about anywhere in Europe.

Saudia owns a Jeddah-based low-cost carrier, flyadeal, which launched operations two years ago. Albrecht said leadership at both carriers have been careful to ensure each stays independent as flyadeal has established itself.

“The formula is to allow them to run their own life and that’s been a good formula,” Albrecht said. “But as they evolve, then they will start feeding our international hubs.”