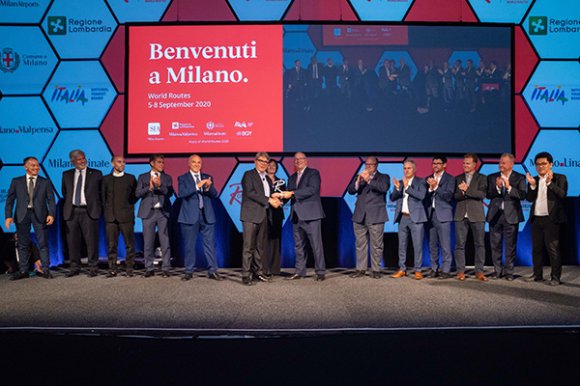 As another highly successful and exciting World Routes 2019 draws to a close in Adelaide, preparations are already underway in Milan to host next year’s forum.

The 26th annual world route development forum will be hosted by SEA Milan Airports, in partnership with local stakeholders Lombardy Region, the Municipality of Milan, ENIT – Italian Tourist Board and Bergamo Airport, and will take place from 5-8 September 2020.

Steven Small, Brand Director at Routes said, “As one of the most connected and easily accessible cities in the world and located in the booming Lombardy region, Milan is at the heart of Europe. In fact, the Roman name for the city, Mediolanum, is often translated as “middle-earth”. Few cities in Europe or indeed the world can compete with Milan’s infrastructure, which made it a perfect choice for World Routes 2020”.

“Since hosting EXPO 2015, which attracted around 22 million visitors and exhibitors from 140 countries, Milan has undergone a significant transformation. Hosting the 26th World Routes in 2020 will consolidate Milan’s growth by showcasing its huge potential and creating opportunities for new route development”.

Served by three international airports, Malpensa and Linate of SEA Milan Airports and Milan Bergamo Airport of SACBO, Milan is a top European region for airport infrastructure. In 2018 the three airports welcomed more than 47 million passengers and offered 900 daily direct flights to 345 global destinations. Malpensa also handled 558,000 tonnes of cargo in 2018, representing 53% of Italy’s total air cargo traffic and bolstering its status as one of the leading cargo hubs in Europe.

Armando Brunini, CEO of SEA Milan Airports, said: “Milan is a brand known around the world and World Routes 2020 is a wonderful opportunity to strengthen it even further by enhancing the connectivity of our airports to the world. We thank Routes for their support and we are confident that we can deliver a world-class event in Milan.”

In addition to being recognised as the fashion capital of the world, Milan boasts some of the world’s most iconic cultural sites, including La Scala Opera House, Duomo Milano and Basilica di San Lorenzo. The surrounding Lombardy region counts ten UNESCO World Heritage sites, the highest concentration of any region in Italy. It is little wonder then that tourism is growing at a rapid pace, with more than 6 million tourists coming to the city in 2018 and generating a turnover of €8 billion. By hosting World Routes, Milan can extend its reach to new parts of the world and draw even higher volumes of visitors.

With unrivalled opportunities for networking with leaders in aviation and tourism, a unique conference programme and a fantastic location, the international aviation community is already looking forward to next year’s event.