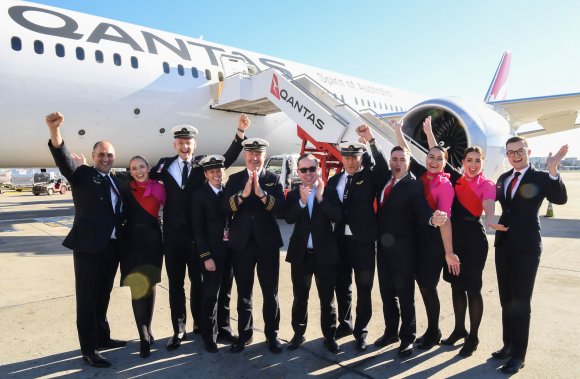 Qantas is likely to launch ultra-long-haul commercial routes from 2023 if it decides to push ahead with its Project Sunrise plans. The airline could also launch services from the east coast of Australia to various destinations in Europe and North America.

That’s according to chief executive Alan Joyce, who was speaking after the Oneworld member completed the first of three ultra-long-haul test flights as part of the initiative. A total of 49 passengers and crew were on the Boeing 787-9 service from New York John F Kennedy to Sydney, which landed after 19 hours 16 minutes in the air.

The flight was used to run a series of experiments to assess health and well-being of pilots, crew and passengers on-board. Tests ranged from monitoring pilot brain waves, melatonin levels and alertness, through to exercise classes for passengers.

Joyce said Qantas would make a decision on the Project Sunrise business case before the end of this year and he hopes the start of ultra-long-haul commercial flights would “likely be from 2023” when appropriate aircraft are available. Airbus and Boeing have each pitched aircraft - the A350 and 777X respectively - with the range to operate Project Sunrise flights on a commercial basis.

“We know that the demand is there, we know that people are interested in it, we know people want to fly these [routes] and save the time,” Joyce said. “We want to make this a reality by 2023 from New York and London and maybe a lot of other destinations in Europe and North America.”

The 787-9 used on the 16,200 km journey between New York and Sydney took off with maximum fuel and a restricted passenger and baggage load to allow the aircraft to operate the flight non-stop. Four pilots were on rotation throughout the flight.

Joyce added: “What’s already clear is how much time you can save. Our regular, one-stop New York to Sydney service (QF12) took off three hours before our direct flight but we arrived a few minutes ahead of it, meaning we saved a significant amount of total travel time by not having to stop.”

Two more research flights are planned as part of the Project Sunrise evaluations – London to Sydney in November and another New York to Sydney in December.

Prior to the first test flight, no commercial airline had ever flown direct from New York to Australia. Qantas has once flown non-stop from London to Sydney in 1989 to mark the entry into service of the Boeing 747-400. That flight had a total of 23 people on board and minimal internal fit-out in order to provide the range.

However, Joyce added: “There’s plenty of enthusiasm for Sunrise, but it’s not a foregone conclusion. This is ultimately a business decision and the economics have to stack up.”