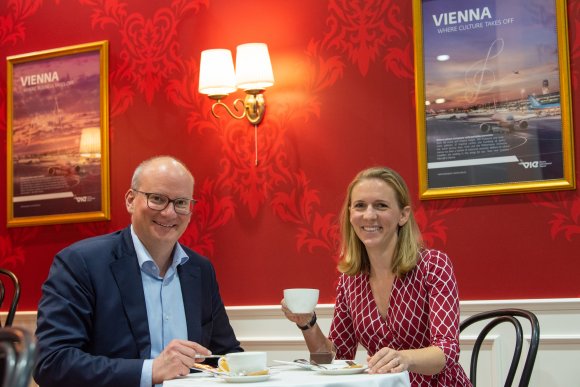 Traditionally a transit point between Western and Eastern Europe, Vienna Airport has experienced a low-cost point-to-point boom since the demise of Air Berlin and NIKI as budget operators continue to battle for a number two position behind Lufthansa Group.

The airport handled a record 27 million passengers in 2018, a rise of 10.8 percent compared with the previous 12 months, and in the first nine months of 2019 alone passenger volumes totalled 24.0 million, up 20 percent on the same period in 2018.

Jäger told Routesonline expects the overall figure for this year to be in excess of 31 million.

“The cake was almost shared out. But when Air Berlin filed for bankruptcy and their market share was released, a lot of LCCs saw the opportunity to grow and become the new number two.”

OAG Schedules Analyser data shows that there are about 6.2 million low-cost departure seats on offer from Vienna this year, compared with 3.6 million in 2017.

However, while the expansion of budget carriers from Austria’s capital has caught the eye, Jäger points out that “growth is coming from all areas”.

Looking ahead, Jäger believes that Vienna’s capacity growth, particularly on short-haul services, will begin to level out. “At one point I think there will be a consolidation - whether it starts next year or the year after we don’t know yet,” he said.

Despite this, Vienna Airport is embarking on a €500m development project over the next four years to cope with future passenger demand.

The project involves the renovation of Terminal 2 and the modernisation of Pier East. Terminal 3 is also being enlarged with the construction of a 70,000 sq m building.

In March 2019, Austria’s Supreme Administrative Court also approved the construction of a third runway, ten years after the project was first submitted. The airport said the additional runway would reduce delays, fuel consumption and noise by eliminating holding patterns and queued aircraft during busy periods.