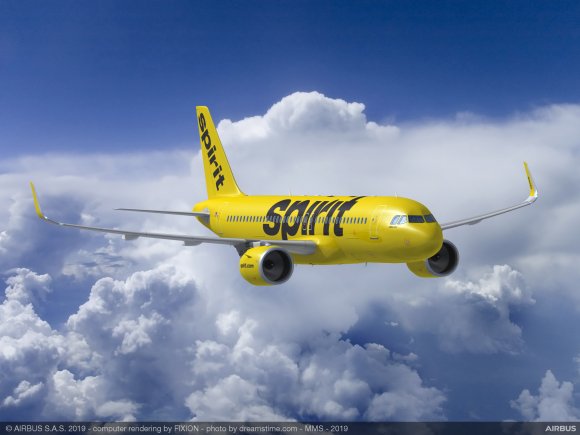 US low-cost carrier Spirit has signed a Memorandum of Understanding (MOU) with Airbus to buy up to 150 Airbus A320neo family aircraft.

“The additional aircraft will be used to support Spirit’s growth as we add new destinations and expand our network across the US, Latin America and the Caribbean.”

Qantas and Virgin secure one Haneda slot each

Qantas and Virgin Australia have been awarded one slot each at Tokyo Haneda, according to a draft decision by Australia’s International Air Services Commission.

The authority has also approved Virgin Australia’s plans to codeshare with Japanese carrier All Nippon Airways on their respective Australia - Japan routes.

Qantas had applied for both slots at Tokyo Haneda, which would allow it to open a second daily flight from Sydney and relocate its Melbourne - Tokyo Narita route.

Virgin Australia had applied for one slot so it could launch daily service from Brisbane.

Aeroflot is to establish a hub at Krasnoyarsk International Airport, fuelling the Siberian airport’s ambitions of becoming a key link for Europe - Asia traffic.

The Russian airline will launch routes to Sochi, Irkutsk, Omsk, Novosibirsk, Simferopol, Ekaterinburg and Tomsk from March 2020. As reported by Airlineroute, a five-weekly Boeing 737-800 service to Beijing Capital will also begin on 29 March 2020.

A statement from Aeroflot said: “A hub in Krasnoyarsk, Siberia’s big economic and industrial centre is a pillar of Aeroflot Group’s comprehensive strategy [to increase] passenger traffic of up to 100 million people by 2023.

“The launch of a new regional hub will help the airline increase transit traffic on international and domestic routes, and expand the route network of inter-regional regular flights bypassing Moscow.”

Average ticket prices have dropped by up to 23 percent on Brazilian routes that have one or more low-cost operators, according to a study released by Brazil's Ministry of Tourism.

Tourism minister Marcelo Álvaro Antônio said: “Stimulating competitiveness is one of the measures to stimulate the drop in ticket prices. Neighbouring countries, such as Argentina, Colombia and Chile, with about a quarter of Brazil's population, have more than double the number of companies flying in domestic destinations. We are on the right track.”

Etihad Airways and Saudia have marked the first anniversary of their commercial partnership by announcing 12 new codeshare routes to destinations in Asia and Europe.

Since signing their agreement in October 2018, the two airlines have placed their flight codes on a number of each other’s services. The latest deal means Saudia will progressively add its code to Etihad flights between Abu Dhabi and Amsterdam, Baku, Brussels, Dublin, Hong Kong, Kathmandu, Bangkok, Phuket, Nagoya, Tokyo and Seoul.

“Since announcing our partnership at this time last year, we have jointly achieved more than 53,500 passenger journeys, five times the 11,390 for the whole of 2018,” said Etihad chief executive Tony Douglas.

“The increased collaboration we have announced today will deliver even more growth to both airlines, provide greater choice for our passengers and freight customers, and further strengthen the ties between our nations.”

CSA Czech Airlines has ordered four Airbus A220-300 aircraft and upgraded a previous order for three A320neos to the A321XLR.

Petr Kudela, the chairman of CSA Czech Airlines, said: “These aircraft fit well with our long-term business strategy in terms of network expansion, will definitely give Czech Airlines a competitive advantage and will increase the capacity of our regular flights.”

Iberia and Hainan to cooperate

Iberia passengers will be able to reach six new destinations in China following a codeshare agreement with Hainan Airlines.

The Spanish carrier is adding its code on Hainan flights between Madrid and Shenzhen, as well as services from Shenzhen to Beijing, Haikou, Chongqing, Guangzhou and Xi’an.

Hainan Airlines is adding its flight code on Iberia’s three weekly Madrid - Shanghai flights, and on flights to 20 other Iberia destinations in Spain, plus Turin, Milan, and Bologna in Italy and Porto in Portugal.

“We are certain that this advance in connectivity will contribute to the growth of tourism in both directions, as well as trade,” said María Jesús López Solás, Iberia’s customer and network development manager.

"The Boeing board fully supports these leadership moves," said Boeing chairman David Calhoun. "Boeing will emerge stronger than ever from its current challenges and the changes we're making throughout Boeing will benefit the flying public well into the future."

Separately, the group said it remains confident that the troubled 737 MAX aircraft will return to the skies before the end of the year.

"We target regulatory approval for the 737 MAX return to service to begin this quarter,” chief executive Dennis Muilenburg said on the company’s third-quarter earnings call.