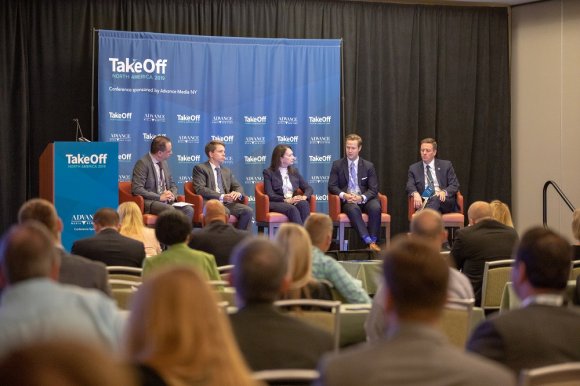 Privatised airports in the US could be more effective at securing new air services despite scepticism from some airlines, the TakeOff 2019 conference has heard.

Better relationships with carriers at group level, greater access to resources and more diverse revenue streams will give privately-owned or managed airports an advantage, said panellists at the event held in Sanford, Florida.

“One of the reasons privatization is rare in the US is because the airlines have so much influence,” she said. “There is a fear that privatisation would not be good for the airlines; but I don’t think that’s true.”

“We need to find more diverse revenue streams; getting private funding will allow us to spend our money on increasing those revenues.

“For air service development, privatisation allows us much more access to resources that we would have, as a small airport.”

Fellow panellist Pierre-Hugues Schmit, chief commercial and operational officer, VINCI airports, also noted that the scale of private organisations means relationships are in place with a large number of carriers.

However, Pierre-Hugues added: “There needs to be someone at the airport level, who is the face of the airport and providing a voice in airline negotiations.

“There is nothing better than ‘pure knowledge of the local environment.”

Meanwhile Jeremy Pennington, commercial director, Vantage Airport Group, noted that “$128bn is going to be needed in airport infrastructure in the US before 2023”.

Pierre-Hugues agreed, claiming that public ownership is “sometimes why airports in the US lack the modernity we see in other regions”.

“The US is unique in the world of airports,” he added. “It’s unusual to see this in a country which encourages entrepreneurship.”