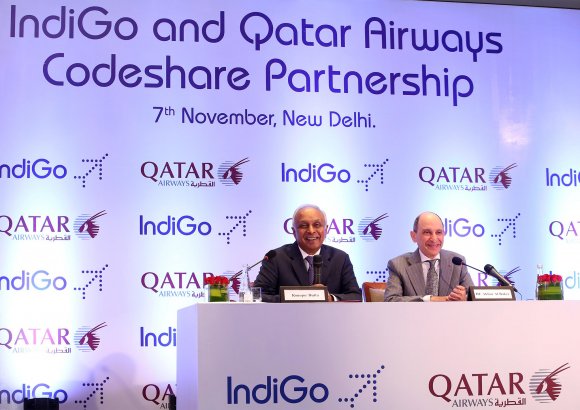 Qatar Airways and budget operator IndiGo have firmed up a codeshare agreement, described as a “first step” to deepening ties between the two carriers.

The deal, effective from 18 December 2019, will allow the Gulf airline to place its code on IndiGo flights between Doha and Delhi, Mumbai and Hyderabad. It represents IndiGo’s second codeshare agreement after Turkish Airlines.

“We are extremely proud to secure this strategic partnership with IndiGo, the largest airline in one of the world’s fastest growing aviation markets,” said Akbar Al Baker, chief executive of Qatar Airways.

IndiGo chief executive Ronojoy Dutta, added the agreement was a “momentous occasion” for the Indian LCC, saying it would strengthen the airline’s international operations and boost economic growth in India by bringing in more traffic.

He said: “These are exciting times for the aviation industry and it is our commitment to remain focused in building one of the best air transportation systems in the world.”

India is one of the globe’s fastest-growing aviation markets, aided by a growing middle-class population with a propensity to fly. According to IATA, the country’s domestic market grew at the fastest rate for a fourth year in a row in 2018, while international traffic is also expanding.

OAG Schedules Analyser data shows that there are more than 171.2 million domestic and 40.2 million international departure seats on offer in 2019, up by 3.3 percent and 0.1 percent respectively year-on-year, despite the exit of Jet Airways from the market in April this year.

Since Jet suspended operations, Qatar Airways has been pushing for additional traffic rights on Qatar – India routes in order to meet demand. In May, it applied to Indian authorities for a temporary increase amid growing pressure on costs.

Jet previously operated 28 weekly frequencies to Doha from Kozhikode, Kochi, Delhi, Mumbai and Thiruvananthapuram. However, Indigo added its seventh destination from Qatar to India in March 2019 with a non-stop daily service to Kannur, and has also increased frequencies on Chennai – Doha and Delhi – Doha from one to two daily.

It is estimated that the community of Indians living in Qatar is about 691,000, representing about 25 percent of the country's total population. There is therefore strong VFR traffic between the two nations.

Under a bilateral aviation framework negotiated in 2009, Qatari carriers can carry up to 24,292 passengers per week to India, while Indian airlines have the same combined total to Doha. OAG figures show that Qatar Airways uses the full allocation, but only 75 percent is currently being utilised by its Indian counterparts.

The codeshare between Qatar Airways and Indigo will therefore enable the Oneworld member to get more seats to India, while also providing feed for flights from Doha to Europe and beyond. For IndiGo, it further expands its international reach and presence in the Gulf region.

Qatar Airways has made no secret of its desire to mitigate losses in the Middle East – caused by the diplomatic crisis with Saudi Arabia, Egypt, the United Arab Emirates and Bahrain since 2017 – by securing more traffic from fast-growing markets, like India.

However, the current bilateral agreements in place means that the airline has the lowest capacity in routes to India compared with Middle East rivals Emirates and Etihad Airways. OAG data for w/c 4 November 2019 reveals Emirates has 59,127 weekly departure seats, Etihad has 29,074 and Qatar Airways has 24,426.

Earlier this year, Emirates also signed a Memorandum of Understanding to enter into a reciprocal codeshare agreement with SpiceJet.