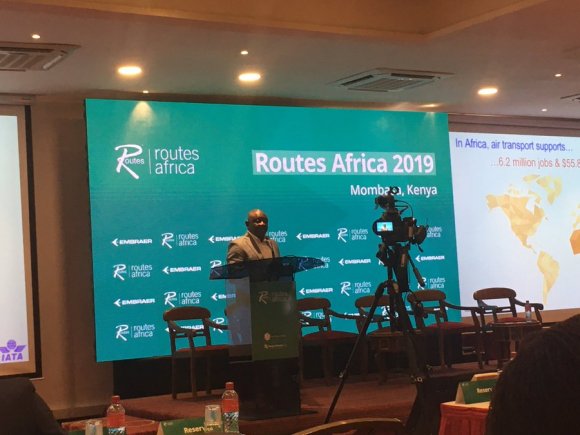 That’s according to Raphael Kuuchi, vice president of Africa at IATA, who provided a state of the region address at Routes Africa 2019 in Mombasa, Kenya.

“We have seen some significant improvements in recent years, but there is a lot of work to do,” Kuuchi said.

He explained that air transport in Africa supports 6.2 million jobs and $55.8bn in GDP, saying that the market is projected to grow at a rate of 4.9 percent annually for international traffic over the next 20 years.

But he added: “If the full potential of the industry in Africa is to be realised, airspace in the region needs to be liberalised. Currently, African skies are subject to some of the most economically restrictive regimes in the world.”

In January 2018, African Union launched the Single African Air Transport Market (SAATM), and its implementation is now being rolled out across the continent.

This project relies on effective implementation from governments, working with the industry, to support the development of the industry and generate economic growth. So far, 32 countries have signed up to SAATM, which represents 59 percent of nations.

Kuuchi said two best performing countries in Africa in terms of intra-continental connectivity – Ethiopia and Kenya – only have direct connections with 29 other countries. “That’s only just over half the continent,” he added.

He said that partly because of this, the typical African citizen travels much less than those on other continents.  In Europe and North America, the average citizen takes two or more flights each year, whereas in Nigeria the average is one every ten years.

“That is how low the travel is today in a big country like Nigeria,” Kuuchi said. “There is huge potential where connectivity is at a very low end. We need to bring that up as an industry.”

He added that South Africa, Nigeria and Kenya are the top three aviation markets in Africa where growth is forecast to be the strongest over the next two decades. South Africa has the potential to grow from 25 million to 53 million passengers by 2038, while in Kenya the market is forecast to increase from 7 million to 21 million and in Nigeria from 8 million to 20 million.

But Kuuchi stressed that the growth of the aviation industry in Africa can only be achieved if the industry works together to improve safety and security; fully implement SAATM; ease intra-Africa mobility; and through greater collaboration among airlines.