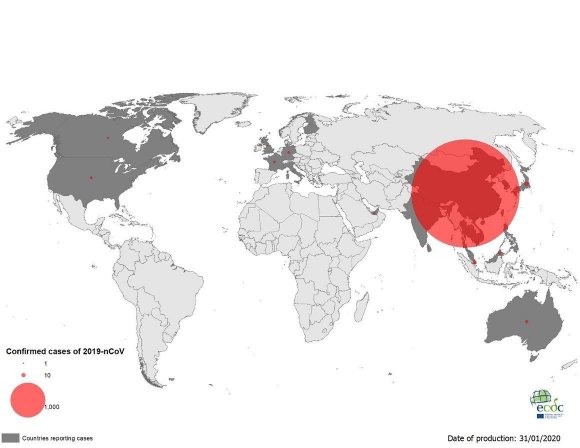 Airlines around the world moved to halt operations to mainland China, as governments raised their travel warnings to the highest levels and enacted temporary travel bans to protect against the spread of a deadly coronavirus.

Airlineroute is tracking the changes here.

In the U.S., American Airlines, Delta Air Lines and United Airlines each moved to suspend all operations to China on Jan. 31, as the Trump administration declared a public health emergency and announced that foreign nationals who traveled to China within the last two weeks will be temporarily barred from entering the country, effective Feb. 2.

Dallas/Fort Worth-based American will suspend all operations to the Chinese mainland through March 27, effective immediately. The decision to cease flying to China came a day after American pilots, represented by the Allied Pilots Association, asked a district court in Dallas County to impose an injunction forcing the carrier to halt all operations to the country, arguing the decision to continue flying there “negligently exposes flight crewmembers to exposure to, and spread of, the coronavirus.”

Atlanta-based Delta decided to suspend all China-bound operations from Feb. 6 through April 30, although it will continue operating flights between now and Feb. 5 “to ensure customers looking to exit China have options to do so,” according to an update on its website. The last China-bound flight departing the U.S. will leave Feb. 3, while the last U.S.-bound flight from China will depart on Feb. 5.

Chicago-based United also suspended operations to China from Feb. 6 through March 28, with the last China-bound flight from the U.S. scheduled to depart Feb. 4. The carrier will continue operating one daily flight between San Francisco and Hong Kong. “As always, the safety of our customers and employees is our highest priority and we will continue to monitor the situation as it develops,” United spokesman Frank Benenati said in a statement.

The Singapore government said all passengers who have travel history in the last two weeks to China from will be barred from entering the country, regardless of nationality. The ban also covers transiting passengers.

The restrictions will come into effect at 11:59 pm on Feb 1 and Singapore's status as a visa-free transit facility will be suspended for Chinese passports. Travel restrictions initially covers Chinese citizens with passports issued in Hubei province.

The Civil Aviation Authority of Singapore will be disseminating the information to all airlines to ensure a “smooth implementation.” While the restriction is not a ban on flights to and from China, leaving uncertain how major airlines will react to the move. Singapore’s LCC Scoot has suspended all flights to China. Scoot flies the only connection between Wuhan and Singapore.

Returning Singaporeans will be forced to take a 14-day leave of absence. Cabin crew flying to China will not be subjected to the new rule, but the respective airlines have to take precautionary measures in consultation with the health ministry

The move comes after the island state reported its 13th confirmed case and more than 9,000 cases have been reported in China. The World Health Organization has also classified the coronavirus as a global health emergency.

Vietnam’s largest LCC, Vietjet Air, has also announced the suspension of all flights to China from Feb 1 until the end of March.

Italian news agency ANSA reported that Italian premier Giuseppe Conte had announced a halt to all flights between his country and China for an unspecified period. He also declared a six-month state emergency, after two Chinese tourists tested positive for the virus in Rome.

Particularly affected by the outbreak will be Finnair, which said Jan. 31 it had decided to cancel all its flights to mainland China between Feb. 6-29. China is a major destination for the Finnish flag-carrier, with its polar services. It operates 35 weekly flights between Helsinki and Beijing Capital, Beijing Daxing, Shanghai, Nanjing and Guangzhou. Its Guangzhou services will be suspended one day earlier and will remain suspended for longer, until Mar. 29.

It has also stopped accepting bookings for mainland China services until Feb. 29. However, its Hong Kong services will continue.

The airline had earlier said it would cancel its Beijing Daxing and Nanjing flights from Feb. 5 to Mar. 29 and from Feb. 8 to Mar. 29 respectively. These longer suspensions remain in place.

The airline said it was continuing to run its services for longer than some other carriers to allow passengers currently in the middle of trips to return home.

“Our customers who are currently traveling want to return home to Europe and China, and we also want to bring our employees home to their respective bases in Finland and China,” Finnair COO Jaakko Schildt said. “These flights are necessary with a view to the number of customers we have in Europe and China and the limited availability of alternative flights at the moment.”

Scandinavian Airlines (SAS) said it was suspending all flights to and from Shanghai and Beijing from Jan.31 until Feb. 9 and closing sales for all services to and from the two Chinese cities until Feb. 29. Its Hong Kong service would also continue as normal.
Spanish flag-carrier Iberia cancelled its scheduled Jan. 31 Madrid-Shanghai service and said it expected not to fly the route throughout February.

UK long-haul specialist Virgin Atlantic advanced the suspension of its London-Heathrow-Shanghai services from the previously announced date of Feb. 2

“We continue to monitor the Coronavirus situation very carefully and following the World Health Organization declaration of a public health emergency of international concern, Virgin Atlantic has brought forward the suspension of Heathrow-Shanghai operations,” the airline said Jan. 31.

Its final outbound service was due to operate Jan. 31, with the inbound returning the following day. Like other airlines, Virgin Atlantic is continuing to operate the company’s London- Hong Kong service.

In Africa, EgyptAir announced the suspension of all flights to mainland China. Its Cairo-Hangzhou flights will be suspended from Feb. 1 and its Beijing and Guangzhou services from Feb. 4, “until the situation stabilizes.”