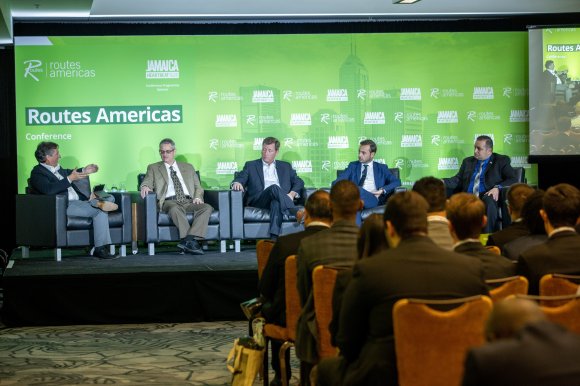 Boeing predicts transatlantic passenger air traffic flow to grow 2.8% annually over the next 20 years in terms of RPKs, indicating one of the world’s most popular air traffic corridors still has plenty of room to grow, Routes 2020 Americas delegates heard.

“In the last few years, it’s been even hotter, with 5-6% annual growth,” Boeing Commercial Airplanes director-airline network, fleet & revenue planning Alex Heiter said during a panel discussion on the transatlantic market at Routes Americas 2020 in Indianapolis, Indiana. “We do expect the dust to settle in terms of traffic flow. To maintain 5-6% a year over 20 years is really an unimaginable level of growth.”

The transatlantic market is essentially split into two segments: 75% is controlled by traditional network airlines involved in antitrust-immunized joint ventures, while 25% is controlled by low-cost carriers, mostly operating from the European side of the Atlantic Ocean. According to Heiter, both segments continue to grow.

He noted that people entering the middle class are more likely to spend disposable income on travel than items, boding well for airlines. “That generation that is becoming middle class—they’re not going to spend money on refrigerators,” he explained. “They’re going to spend it on travel and experience.”

But despite the ongoing growth in transatlantic demand, the barrier for new entrants is difficult, lamented Eastern Airlines CEO Steve Harfst. Eastern is a US-based startup that is using the brand name of the former major US airline that ceased operating in 1991. It started operations in January and is currently flying Boeing 767s between New York JFK and Guayaquil, Ecuador.

Harfst would like to fly transatlantic routes, but believes it is nearly impossible to break into the market. “The opportunity for niche players [to fly transatlantic] is very difficult,” he said. “If you want to play in this game, you’ve got to be an airline certified to operate in that market … If you are an existing airline in the LCC space with aspirations to be a long-haul airline, the certification standards are very tough … You also have to be able to acquire aircraft … [and] airport access is a huge challenge … In the transatlantic market, because it’s so dominated by the big carriers, the opportunity for a smaller airline is very, very difficult. The reality is it’s a very competitive, difficult environment and the power that the large carriers have and their ability to dictate fares is very real.”

Airports speaking on the panel said there is still room for new flights—and perhaps even new players—on the transatlantic market. Ontario (California) International Airport Authority deputy executive officer Atif Elkadi noted that his airport has no nonstop service to Europe currently, but the demand is there.

“At our airport, [nonstop transatlantic service] is going to happen,” he said. “It’s just a matter of when we have that connectivity to Europe. Now [the demand is] being filled by people taking a connection … The first service would likely be either to the UK or Germany. People near our airport are purchasing tickets to fly to the UK and Germany [via connecting flights] … There are 24 million people living in in southern California and 11 million live closest to Ontario Airport. Would you rather have a connection in Phoenix or drive to LAX for a flight to Europe or fly nonstop from Ontario?”

Alvaro Leite, the chief commercial officer of VINCI Airports, which controls airports in Sweden, the UK, France and Portugal, said city pairs operated by narrowbodies, such as an Airbus A321neo or Boeing 737 MAX, are an untapped way to open transatlantic routes. “We believe there are plenty of new markets that can be opened with the narrowbody,” he said. “There are niche markets [city pairs that connect a secondary city on at least one end] that have been abandoned in the last 10 years and clearly there are opportunities there and as a group of airports we want to help airlines open those markets.”