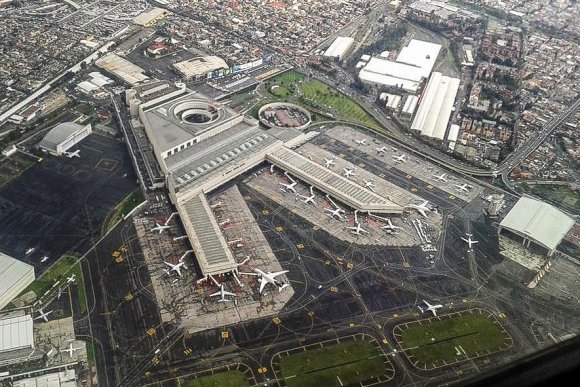 United Airlines has been awarded a slot pair at Mexico City International, which it will use to increase the frequency of flights from San Francisco.

In a filing to the US Department of Transportation (DOT), the carrier said it plans to expand its 2X-daily San Francisco-Mexico City service to 3X-daily from April 26 using an Airbus A319.

However, the Star Alliance member stressed that the slot coordinator has not provided assurances that the slot times will be available for the winter season. It is therefore “at risk” of not being able to operate its planned third flight on a year-round basis.

In November 2019 Chicago-based United requested to be granted one US–Mexico slot pair that was being returned by JetBlue Airways upon the termination of service to Mexico City in January 2020.

JetBlue was awarded the slots by the DOT in 2017. These slots were divested by Delta Air Lines and AeroMexico as part of their agreement to operate a joint venture between the US and Mexico. At the time, the DOT required that Delta and AeroMexico relinquish slots to new entrants, meaning United was excluded.

In the latest DOT filing, United said it was “pleased” to have been awarded the additional summer slot pair at Mexico City, but it “requires certainty” that it can continue offering the third daily flight during the winter.

United has therefore urged the DOT to consider it as an eligible carrier for the divested Delta/AeroMexico slots given that the “commercial and competitive conditions in the market have changed” since the JV was implemented in 2017.

In a separate filing to the DOT, United has called on the department to defer action on Philippine Airlines’ (PAL) application to operate scheduled passenger service between Manila and Seattle. The US airline said it has “no objection” to PAL’s request in principle but asserted that there is not a “level playing field” when it comes to routes between the US and the Philippines.

“United operates flights between Guam and Manila and has been actively seeking to increase its Philippine service with the addition of a daily Manila flight,” the Star Alliance member said. “However, to date, United has been refused slots and other airport infrastructure necessary for its future flight plans, while Philippine carriers continue to increase capacity to the US.”

As such, United said the DOT should defer action on PAL’s application, asserting it will only be in the public interest to grant the request once the carrier is able to expand service as well: “United reiterates that it is not opposed to PAL’s application request and is not asking the department to deny the application at this time.

“United is simply asking the department to defer action until United is able to execute its Manila growth plans via commercially viable slots and necessary airport infrastructure.”

PAL intends to operate its Manila–Seattle service 3X-weekly from May 3, 2020 using Airbus A350-900 aircraft. From May, the airline also intends to resume operations between Cebu, the host of Routes Asia 2019, and Los Angeles.