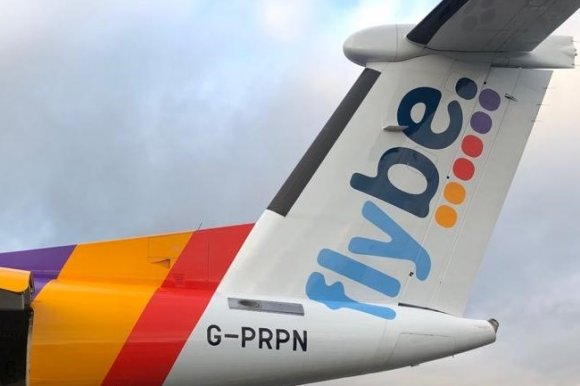 The UK Civil Aviation Authority (CAA) confirmed early on Thursday morning that the airline had entered administration, with accountancy firm EY appointed to handle the process.

Passengers who have flights booked with Flybe today or in the future are advised not to travel to their airport, unless they have booked alternative arrangements.

Flybe CEO Mark Anderson said the UK has “lost one of its greatest regional assets.” The airline’s failure puts 2,400 jobs at risk.

“Flybe has been a key part of the UK aviation industry for four decades, connecting regional communities, people and businesses across the entire nation,” Anderson said.

“I thank all our partners and the communities we have been privileged to serve. Above all I would like to thank the Flybe team for their incredible commitment and dedication.”

In a statement, Virgin Atlantic said the Connect Airways consortium has invested more than £135 million ($174 million) to keep the airline flying over the past 14 months. This amount includes approximately £25 million of the £30 million committed in January 2020, alongside a “time to pay” arrangement with the UK treasury for air passenger duty to the value of £3.8 million.

“Sadly, despite the efforts of all involved to turn the airline around, not least the people of Flybe, the impact of COVID-19 on Flybe’s trading means that the consortium can no longer commit to continued financial support,” the statement from Virgin Atlantic said.

Administrators of the Exeter-based airline said Flybe, which was due to be rebranded Virgin Connect, was hit by rising fuel costs, currency volatility, and market uncertainty, alongside “added pressures on the travel industry” in recent weeks following the COVID-19 coronavirus outbreak.

A statement from Stobart Group, which has a 30% stake in Connect Airways, said the impact of the virus means that the consortium “can no longer commit to continued financial support.” Stobart Air is not a wholly owned subsidiary of Connect Airways and continues to trade.

The UK Regional and Business Airports (RABA) Group stressed that Flybe’s network will not easily be replaced and for some routes this process may take years, rather than months. According to RABA the impact on smaller regional airports—and the catchments and economies they serve—needs to be properly factored into the case for UK government intervention.

“Flybe's services provided vital transport connectivity for many regional, remote and peripheral regions in the form of efficient access to major cities and business centres across the UK and near Europe and to hub airports for onward travel to global destinations,” RABA chairman Neil Pakey said.

“Equivalent journeys by rail, road or ferry are frequently wholly inadequate for local businesses wishing to operate efficiently, friends and relatives wishing to meet or tourists wishing to visit. In other words, such routes can be viewed as essential economic and social services operating as critical regional infrastructure.”

Looking ahead at the summer 2020 season, Flybe was scheduled to fly from 27 airports in the UK, as well as 28 internationally. In total, the carrier planned to offer 6.9 million available departure seats across 139 routes.

Manchester Airport (MAN) would have been the regional carrier’s largest airport by frequency and capacity this summer, with 9,399 departures and 749,196 available seats.

The airline planned to offer 16 routes from MAN, connecting the city with eight domestic and eight international destinations. The route from MAN to Belfast George Best City (BHD) would have been the largest by capacity, with 105,300 two-way seats.

OAG data shows 64.2% of Flybe’s planned summer capacity from MAN was domestic, while the airline would have accounted for 55.2% of the airport’s UK domestic capacity.

BA is the second largest provider of domestic seats from MAN with a 22% share of the market, followed by easyJet with 14.4%. Loganair, Aurigny Air Services and Ryanair also offer domestic routes from MAN.

A statement from MAN said: “We regret the loss of Flybe, which has played an important role in connecting communities around the UK, and our thoughts are with those people whose jobs have been affected by today’s news.”

Southampton Airport (SOU) would have been the second largest in Flybe’s network by number of departures this summer and the fourth largest in its network in terms of capacity. The airline was scheduled to offer 631,192 departure seats across 8,751 flights.

Elsewhere, Birmingham (BHX) and BHD would have been the second and third largest airports in Flybe’s network this summer by capacity, with 691,622 and 679,927 scheduled departure seats respectively.

BHD CEO Brian Ambrose also said negotiations with a number of carriers are “already underway” about replacing the lost capacity.

“I am confident that these well-established routes, coupled with our city centre location and recent £15m investment in terminal facilities, will prove an attractive option to airlines,” Ambrose said.

BHD said Flybe was a significant economic driver for Northern Ireland, carrying 1.6 million passengers to and from Belfast in 2019. It was scheduled to fly to 15 destinations from BHD in summer 2020.

Of the 139 routes which Flybe intended to operate during the summer 2020 season, OAG data shows that the airline had a monopoly on 117 of them, equating to 88.6% of its network. Of the 22 where it faced competition, the carrier competed with just one other operator on 17 of them and two airlines on the remaining five.