Spanish carrier Volotea has signed an MOU with International Airlines Group (IAG) regarding the transfer of certain routes and slots held by Air Europa and Iberia.

Iberia-owner IAG agreed in November 2019 to buy Air Europa for €1bn, a deal designed to boost the company’s presence in the South American transatlantic market and turn Madrid into a key European hub airport.

As part of efforts to secure competition approval from the European Commission (EC), IAG has proposed a “fix-it-first remedy” whereby—following the acquisition of Air Europa—Volotea would start to operate routes that might otherwise attract regulatory objections.

If the EC approves this proposal, Barcelona-based Volotea expects to open “between two and four” new Spanish bases and strengthen connectivity between the Canary and Balearic Islands, as well as Asturias, the Basque Country and Galicia.

Volotea founder and CEO Carlos Muñoz said the expansion plans represent an “important step forward” in Spain, where the LCC has bases in Asturias (OVD) and Bilbao (BIO).

“The challenge is very exciting and I’m sure that the great team at Volotea will be able to offer the Spanish client what we know best: to launch new routes at very competitive prices and with a high level of service,” Muñoz said.

Since it began flying in April 2012, Volotea has opened between 30 and 60 routes per year. In Spain, the carrier operates 92 routes and flew 1.4 million passengers in 2019.

The airline’s business model initially focused on connecting small and mid-sized European cities with direct flights, but it has since opened a large hub in Athens (ATH), improved its connectivity in Madrid-Barajas (MAD) and intends to open two new routes this year from Barcelona-El Prat (BCN).

Overall, the carrier operated 319 routes last year and will reach 354 routes this year from its 16 bases in five European countries. The LCC expects to fly between 8.5 and 9 million passengers this year, up from 7.6 million in 2019.

According to figures from OAG Schedules Analyser, Volotea is one of the fastest-growing LCCs in Europe having increased total capacity from 2.5 million seats in 2014 to more than 8 million in 2019. Growth from 2018 to 2019 was 14.1%. 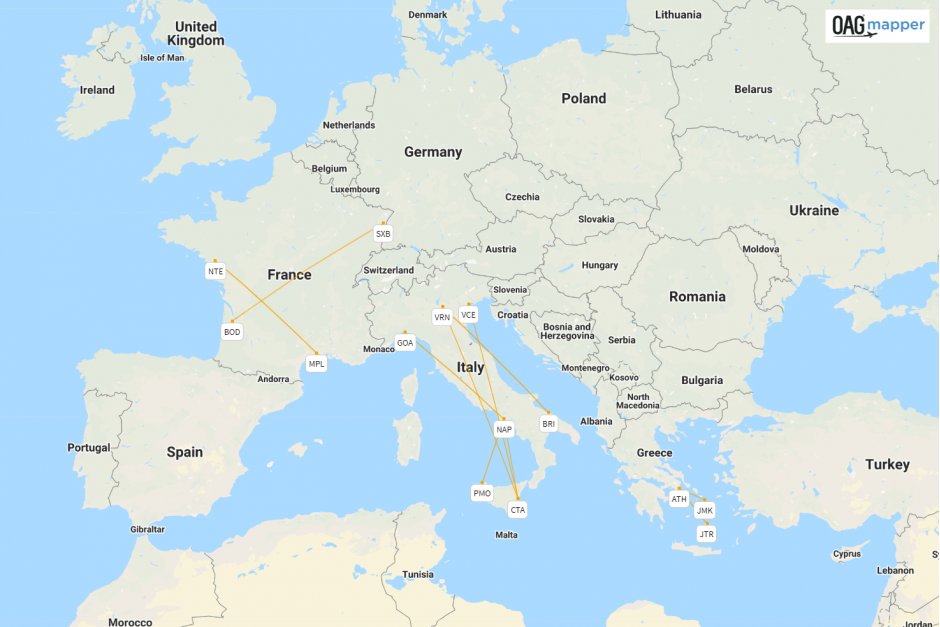