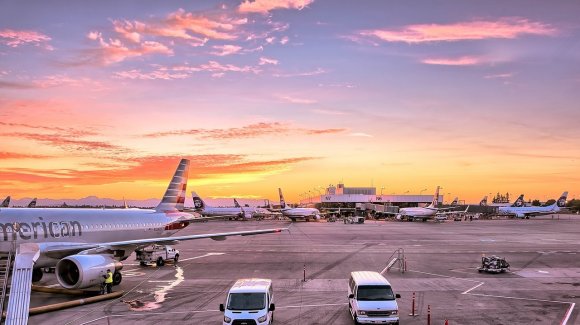 The total number of international departure seats from North America dropped by 191,000 last week to 3.4 million as the US-Europe travel ban came into effect. However, domestic capacity rose by 224,400 seats, with some airlines able to redeploy aircraft to home markets. This increase was mainly felt in the US where domestic capacity rose by 1.1% to 19.9 million seats.

The OAG schedules data shows top 10 North American airlines by capacity broadly maintained levels last week although many announced deep cuts that have—or are about to—come into effect. American Airlines’ capacity reduced by 0.9% week-on-week to 5,090,674 seats, while United Airlines’ capacity dropped 1% to 3,832,922. Capacity at Air Canada and Frontier Airlines reduced by 0.2% and 0.3% respectively.

American has said it will ground about 55,000 flights in April and is parking 450 aircraft. As reported by Airlineroute, between late-March and early-May 2020, the airline will only serve three long-haul routes: Dallas/Ft. Worth-Tokyo (DFW-HND), DFW-London Heathrow (DFW-LHR) and Miami-LHR (MIA-LHR).

President Robert Isom said: “This is a crisis unlike any we’ve faced in the past. Together, we will continue to be aggressive on all fronts so that we ensure American’s future is intact. We are in the fight of our lives, and we will win. Now is the time to come together and rally against a common enemy.”

Last weekend, the carrier began utilizing its currently grounded passenger aircraft to move cargo between the US and Europe. The first cargo-only flight departed from DFW on March 20, landing at Frankfurt (FRA) on March 21. This was the first scheduled cargo-only flight since 1984 when American retired the last of its Boeing 747 freighters.

CEO Ed Bastian announced that the company is parking at least half of its fleet. In total, the airline is cutting 70% of its capacity and 80% of its international operations. It is also closing the majority of its Sky Club airport lounges.

Bastian revealed that revenue for the month of March is now expected to fall by nearly $2 billion year-over-year, and April projections anticipate an even greater fall. To preserve cash, the company will defer nearly all capital spending, including all new aircraft deliveries, while parking more than 600 aircraft and accelerating the retirement of its Boeing 767s and MD-88/90s.

“We are having constructive discussions with the White House and Congress and remain optimistic that our industry will receive support to help address this crisis,” Bastian said.

United suspended service across 60% of its systemwide schedule, including a 42% reduction across the US and Canada and an 85% decrease in international flights. United will continue operating 45 daily international flights from a handful of its primary hubs including Houston Intercontinental (IAH), Newark, New Jersey (EWR) and San Francisco (SFO).

Regarding potential domestic service suspensions, United said it is “closely monitoring demand as well as changes in state and local curfews and government restrictions across the US and will adjust its schedule accordingly throughout the month.”

Follow Airlineroute for all the latest COVID-19 flight changes

There were 1,237,607 departure seats from ATL last week, a rise of more than 23,000 compared with the previous week. Minneapolis/St Paul (MSP) experienced the second-largest rise, with an additional 18,179 seats. The biggest reduction came at JFK, which experienced a week-on-week fall of 28,711 departure seats, while MIA dropped 21,071 and Newark Liberty (EWR) by 15,552 seats as the US-Europe travel ban kicked in.